Stories of the First Half & Wishes for the Latter.

10. Delmon Young Throws Bat - Wow! No words can express Delmon Young's actions. The footage of this action was one never seen before as the bat thumped off the umpire's chest. There's a line seperating actions of how far to voice your opinion on the officiating of any game, but Young crossed that line and then some. Very foolish move on his part as a prized prospect in the Devil Ray's organization. Due to his actions, he got dealt with. Young recieved a 50 game suspension handed down by MLB and a ruined reputation.

9. Joe Mauer Becomes Difficult Out - .378 avg.- 7HR -45 RBI - .446 OBP - .535 SLG%. Joe Mauer has been on a tear this year hitting everything that is thrown at him. His ability to drive every pitch for a hit has helped the Minnesota Twins make run at the divisions top two dogs in the Chicago White Sox and the Detroit Tigers.

8. Public Reaction to A-Rod - It's no secret how the media and New York fans have treated A-rod during the first half. For a guy that has been nothing but politically correct, timid, and humble throughout his career, the boos and jeers had to get to A-Rod's psychy. Nonethless, the whole hype of him not being "c 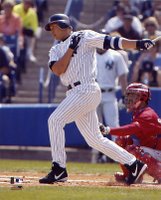 lutch" is a rather fixture of creation by the media looking to stir the pot on a story. A-Rod hit over .350 with runners in scoring position in the first half. Yes, he did have a tough time with the slump, but who doesn't experience that? A-Rod's the prime example of a succesfull, easy going guy that is criticized for no apparent reason. We complain so much about today's athletes not being roll models. Yet, when we finally get one, we try to tear him down. The oh so powerful media outlet.

6. Central Divisions - The NL Central has been home to many surprises in baseball. Although the Cards are currently still the kings of the division, many clubs such as the Reds, Brewers, and Astros remain in contention. On the other hand, the AL Central has been baseball's best division thus far sporting the league's two best teams and the quickly rising Twins right behind them.

5. Struggling Angels - Although they are only 2.5 games out of first place, the struggling Angels have opened the door in the AL West. Usual powerhouses in the division, the Angels have struggled in every way possible this year, mainly with a poor offense.

4. Bonds passes Ruth - This one was years in the making, and it finally happened. As subdued as it was, it was nonetheless, an event that baseball fans will have in their minds forever. Although the road to 715 was slow due to Bonds' injuries and lack of preperation in Spring Training, homerun 716 in San Francisco off of Brian Moehler will always be remembered.

3. Yankees Banged Up - Injuries to the New York Yankees has killed what could've been a very forceful offensive machine this season. The Yankees had the potential to possibly score 1,000 runs this season. Despite the injuries, notably Gary Sheffield and Hideki Matsui, the Yanks have managed to stay within 3 games of the first place Boston Red Sox.

2. New York Mets - At 53-26, they were expected to be good this year. It's just hard to believe that the Mets are finally good. With one of the most exciting teams in all of baseball, the Mets are slowly pushing the Yankees off the backpages of the New York City newspapers.

1. Detroit Tigers - By far, the most surprising story of the year. The Tigers gout out to a hot start and haven't lead up yet. At 59-29, the Tigers are geared for the post-season. Something Tiger fans have long awaited.

1. Yanks Re-Group - Being able to see the Yankees get Sheffield and Matsui, and yes, even you Mr. Pavano back would be exciting to see. Their is unbelievable potential for the Yankees true roster, and not only as a Yankee fan, but as a baseball fan, would it add to an already exciting MLB season.

2. Bonds and Griffey Return to Norm - These two have meant so much to baseball over the past ten years. To be able to watch both men return to old form for atleast half of a season would be great for baseball. Especially with both being on teams that are still in the playoff hunt, a discovery of the fountain of youth would be a blast from the past.

3. New Collective Bargaining Agreement- With the new deal set to expire in December, MLB and the Major League Player's Association need to agree on a new CBA to prevent another strike. With the game at an all-time high, the need to agree on all the key issues to keep the game moving ahead is vital.

4. Playoff Contention - This year MLB is beginning to see the fruits of the labor from the 2002 CBA. With revenue sharing, teams are now able to compete and contend for the World Series. This year, every division except for the NL East is still open. As the baseball season kicks off the second half and hopefully, down the stretch,it would be nice to see all the teams stay close, making September exciting. Everyone wins, with exciting September baseball.

5. More Young Talent - The first half we have seen a display of various young talents throughout the league. It almost seems that every team in MLB has one or two young talents that is exciting. Even the New York Yankees, who has been known in the past to trade away young talent, have a few. Hoepfully, the young talent stays hot, and during september call ups, we'll see more.

6. Coverage of Jose Canseco Stops - Hopefully, ESPN will stop showing footage of Canseco's comeback on Sportscenter and Baseball tonight. He's a guy that is self-indulgent and it is just another one of his sick plots to put himself in the spotlight. Let's move on and not give Canseco any attention. As he hasn't done anything positive for the sport that has made him who he is. 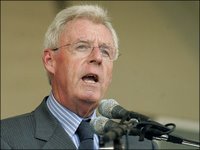 7. Healthy Peter Gammons - This is simple. No peter Gammons, means baseball during the trade deadline is boring. It's definately an emty void without Gammons bringing those uncanny statistics and hot news to us every night. Get Well Peter.

8. Royals and Pirates Prepare - The Pirates and Royals stink. Period. Hoepfully, they will use this time to improve themselves and to prepare for next year.

9. Good Post-Season & World Series - Baseball has had some really good post-seasons and another one wouldn't hurt. An exciting month of October is the only way to cap off what has been a tremendous start to the 2006 campaign. Let's just hope the National League representative can show up in the Fall Classic.

Enjoy the second half of the season.