Erasing the Lines (again) Within the War 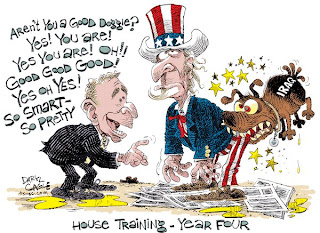 So, we need more troops?

No big deal right? Well, President Bush doesn't seem to think so. In his latest address to the nation on the status of the war in Iraq, President Bush unveiled his new plan which centers around increasing the number of troops deployed to Iraq. A plan which is very controversial and seems questionable even amongst republicans and the most fervent Bush supporters.

President Bush's new plan calls for an additional 22,000 troops in Iraq to cover "mistakes" from the previous operation. The troops will be used to protect already safe areas, and to protect the Iraqi border. Bush also calls for effort from Iraq and claims that under the new plan, American forces will fight alongside Iraqi forces. Bush said that, "failure in Iraq would be a disaster for the United States. A democratic Iraq will not be perfect. But it will be a country that fights terrorists instead of harboring them." To ensure that this will hapen, President Bush's plan will call for an additional $1 Billion dollars of funding.

Yours truly has never been a strong supporter of any specific political affiliation. I've agreed and disagreed with many political decisions, but have always trusted the judgement of our elected officials. Nonetheless, the war in Iraq has been a topic that has slowly erased the line that seperates political parties. In 2003, the War in Iraq began and saw an astounding 76% of the United States in agreement for the war. Whether you were a republican, democrat or an independant, 9/11 lingered in your memory, and doing whatever it took to rid God's green earth of "evil doers" was necessary. However, as the years progressed, the war began to take a turn for which divided the parties again. Topics of fatalities, economy, oil, war, and homeland security questioned the purpose, ethics, and benefits of the war. In 2004, 61% were in favor of the war; 2005, 50%; 2006, 39%; and finally here in 2007, 26%.

By aiding Iraq with more funding and more troops decreases the responsibility, development and functioning of Iraq, it's government, and it's people. Not to mention the risk of increasing American casualties in the process. The United States can put $1 billion to productive use here at home.

Republican, Democrat or Independent- we all show the same consensus for this plan.

For the first time ever, I am afraid, and truly question what our leaders are doing.