Changing The Landscape and Breaking the Seal: The Effect of Gail Kim 'Jumping Ship' 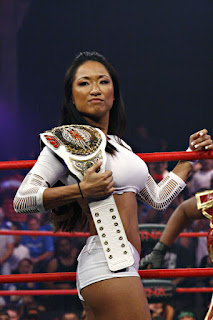 In what may be the biggest transaction of the year in the professional wrestling industry, Gail Kim has decided to "jump ship" from Total Nonstop Action Wrestling to the larger World Wrestling Entertainment.

Kim, regarded as one of the best female wrestlers in the world today decided not to extend her contract with TNA wrestling after receiving what was describe as a "large financial offer" from rival, WWE.

The signing has solidified the market demand for not only talent, but top female talent in the professional wrestling industry.


After years of a creatively stagnant industry with a lack of depth in tag team and female wrestling, (mostly due to the WWE stronghold on the industry), the market for talent, any talent was non existent. Either work for Vince McMahon, or find yourself another profession. However, with the late upstart of many promotions over the few years due to innovation and creative concepts, variety in the business has happened again.

With variation comes creativity. With creativity comes opportunity. With opportunity comes a chance for success. And success it was as, women's wrestling benefited greatly due to that variation.

Women's wrestling for the past two decades has seen itself disintegrate, becoming a bathroom break for fans at events, and a channel changer for those at home with almighty remote control. After planning out a new concept on building a new women's division, TNA decided to build the division around Kim. And why not? After all, Kim is athletic, good looking, and has the attitude that is presentable for the targeted audience. Wrestling columnist, Wade Keller, stated in regards to Kim:

Kim's contribution to the spirit, athleticism, and seriousness of the Knockouts division was as significant as A.J. Styles and Jerry Lynn with the X Division six years ago. As I recently stated, her character was as much of a role model for girls and women as you'll find on a pro wrestling show.

What Kim has accomplished in the 21st century for women in professional wrestling is similar to what Gina Carano is attempting to prove in mixed-martial arts - and that is women can be just as athletic, just as physical, and just as hard hitting as their male counterparts.

Today, women's wrestling is on the rise again much impart to Kim's dedication. TNA's Women Knockout's division is second to none in the world earning high television ratings and even holding the main event slot at many events featuring top male talent. Many other promotions around the world are falling in line as the model is entertaining and has proven to be business worthy.

With the United States economy in shambles, disposable income for fans and families may only be enough for one show.

Wrestling organizations are aware of that. And you can bet the house (if it hasn't been foreclosed) that Gail Kim knows that as well.

And just like old times, many wrestlers are going to be looking for their opportunity to cash in when their contract expires.

After revolutionizing women's wrestling as whole in the industry, Kim now takes her talent (and cash) to the biggest stage of them all, WWE, while opening up the free agent market to other wrestlers once again.

After almost a decade of a monoplized, creatively stagnant industry; Kim has managed to change all of that through her efforts, and her latest signing.