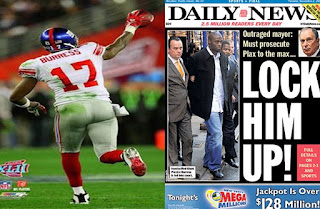 So when the image of the professional athlete could not get any worse, Plaxico Burress happens.

In the wake of a fallen economy, and tough times, the nation looks toward sports, their teams, and their athletes to take them away from their lives. Their reality. It's a position that brings athletes fame, fortune, and wealth at the expense of their fan base. All in exchange for removing them from reality.

However, Plaxico Burress had reality brought to him several days ago when he shot himself in New York.

Plaxico Burress pulled the trigger on his career in more ways than one.

After several days of this situation unraveling, questions have been raised about the safety of professional athletes. Are they in danger? Have they ever felt threatened? Are they justified in carrying firearms? All of these questions can be debated due to the tragic incidents regarding, Eddy Curry, Steve Smith, and the late Sean Taylor.

However, Burress' situation is less sympathetic due to harming himself accidentally, along with the potential of someone else, and his possession of an illegal weapon. Burress, who is now criminally charged and could face jail time, failed to show responsibility to others, his teammates, his family, and himself.

The questions of safety regarding athletes is viable. In fact, it is an issue worth investigating for league officials, players associations, and players themselves. The question regarding Plaxico Burress should be, how can he have let this happen? It is that simple.

We have the right to bear arms. Guns can be legalized. If your safety is being threatened and you are interested in obtaining a firearm, do it the right way. After all, it's the law.

Professional athletes too many times view themselves as invincible due to the accolades and wealth they receive. They become wrapped up in the aura of it all, and lose sight of the responsibilities, and blessing of being a professional athlete.

Buress has tremendous talent, that can stand the test of his peers. His problems prior to this have all been self-inflicted, and one would hope that he truly seek the help he needs.

After Michael Vick, and Adam "Pacman" Jones, you hope that more athletes would be more conscientious of their decisions.

It's a situation we've become too familiar with. Unfortunately, poor choice, and bad judgment may have claimed another career.