One More Year of Possible Frustration. A Future of Guaranteed Idiocy.

After all the drama, after all of the controversy, it now comes down to one year for Isiah Thomas to turn around the mess that he created. Isiah has one year to improve the group of misfits that he has put together for an NBA roster.

The fact of the matter is that the Knicks are a mess. They have become arguably the most embarassing franchise in sports. A collection of high-priced players with no resumes of winning else where combined with a lack of leadership on the coaching, front office and ownership level is a combustible formula for any sports organization. It's sad. It's sad to see an organization that is used to winning and has a history of greatness and class reduced to nothing. Guys such as Patrick Ewing, Clyde Frazier and Willis Reed all who have worn that illustrious blue and Orange "New York" across their chests with pride and dignity are now an afterthought. Madison Square Garden - the mecca of basketball, and most historic arena in the world has been soiled by a spirit of mismanagement, dissatisfactions and defeat. This is now the New York Knicks.

With all that has been said about this franchise as of late, it is interesting to see many take a side on the issue. Larry Brown, James Dolan or Thomas, who's to blame?

Many claim that Isiah is to blame. Yes, despite a few prosperous drafts, he doesn't have much claim to success as an NBA executive. He got fired from the Raptors, tanked the entire Continental Basketball Association, and has made the Knicks into a punchline for numerous jokes. He's at need for power, and will not stop until he gets what he wants.

On the other hand, there is Larry Brown. Brown, a future Hall of Famer has all the credentials you need as an NBA coach. Infact, he has the resume of all head coaches in basketball. Nonetheless, Brown 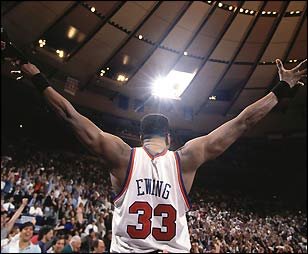 accepted the 5 year, $50 million contract. In doing so he knew what he was stepping into. According to reports, he approved the trades of Jalen Rose and Steve Francis, two guys he apparently wanted to trade at season's end. Brown is at fault here, although everyone would like to make him out to be the good guy, a mere victim of evil Thomas' doings.

And then there is James Dolan. Creator of this mess. Son of Cablevision founder, Charles Dolan. Current head of the Cablevision empire. Head honcho for your New York Knickerbockers. And most widely known, yes, as an idiot. This man is incapable of making any correct decision regarding business and/or the New York Knicks. He has done everything wrong since daddy handed the empire over to him. Since the day he became the man, the Knicks have gone downward every year as fans have seen prices not only for Knick games increase, but service from Cablevision as well.

This entire spectacle of a sport management joke began when Mr. Dolan himself employed the anti-genius, Scott Layden. Layden was like a cancer to the Knicks organization. Doing nothing but inflate the payroll, draft horribly, make bad trades and feed his weird fetish for Utah players by constantly scouting them. Layden, who traded off Patrick Ewing for basically nothing, drafted Frederic Weiss (Who never ended up playing in the NBA) over Ron Artest, secured Alan Houston's retirement fund with a hefty and overpaid $100 million contract, ran a once NBA title contender year in and year out into the ground. Nonetheless, the cries of fans at each NBA draft of "fire Layden" didn't alarm Dolan. It took him a few more years to realize that the Knicks were in bad shape.

Layden is fired. In comes Isiah.

Isiah was indeed looked upon as a fresh of breath air for Knick fans. For years we've dealt with Layden and his antics, and at the time it seemed, anyone but Layden was a plus. Isiah made the move for Marbury which was huge. However, with Thomas followed the sign and trade for Jamaal Crawford and Eddy Curry, the signing of Jerome James and Larry Brown, and the trades for Steve Francis and Jalen Rose. After it all, we find ourselves full circle in this crisis.

And what does Dolan do throughout all of this? Nothing.

He simply takes for granted that ticket sales will be there, viewership will remain and the Garden will be sold out. Mr. Dolan needs to suck up his pride, admit his wrong doings in public (Not on MSG like his fixed press conference), clean house, and hire some real basketball minds.

But no, instead we get... one more year. It's like Dolan, a monster, wants New Yorkers to suffer.

With the NBA draft tomorrow, the pressure is now on Isiah. He's got full control of everything. This is where it begins and ends. Whether he fails or succeeds, it will definately bring to an end, numerous years of torment for the New York Knicks. Whether it ends with promise or failure, this "One year" will definitely end a chapter for the franchise.

Too bad the book is being written by James Dolan. A book destined for idiocy.