Chance and Risk: The Future of the African-American Baseball Player

June 07, 2007
"I want to win pennants and we need ballplayers! I've stretched my efforts in this two-year search for players of promise. Do you think you can do it? Make good in organized baseball?"

This was the brief dialog between Branch Rickey, Brooklyn Dodger boss, and a young Jackie Robinson in 1946. Robinson made it clear to Rickey that he was able to conquer all of the obstacles ahead of him to make the game of baseball better for all people. Robinson met and hurdled all of the obstacles. Robinson opened the eyes to many that baseball was anyone's game, and enlightened a nation stuck in its ignorant ways. Because of Robinson, there was an opportunity provided for African-Americans to participate in America's game.

Fast-Forward sixty-years later. Coming off the heels of celebrating Robinson's 60th anniversary of breaking the color barrier in Major League Baseball, the sport finds itself with a dwindling African-American population. Now there are several reasons for the departure of African-Americans to other sports such as:

Now everyone has analyzed, critiqued, and responded to Gary Sheffield's comments. Just in case you were under a rock somewhere and didn't read the comments, Sheffield said:

"I called it years ago. What I called is that you're going to see more black faces, but there ain't no English going to be coming out. … [It's about] being able to tell [Latin players] what to do -- being able to control them," he told the magazine.
"Where I'm from, you can't control us. You might get a guy to do it that way for a while because he wants to benefit, but in the end, he is going to go back to being who he is. And that's a person that you're going to talk to with respect, you're going to talk to like a man.
"These are the things my race demands. So, if you're equally good as this Latin player, guess who's going to get sent home? I know a lot of players that are home now can outplay a lot of these guys."

Yes, they were out of line. Yes, he did have valid points in there somewhere. Yes, he chose his wrongs incorrectly. Yes, he does have some credibility to his statements. Yes, he might be overshooting the situation. However, you can toss, turn, flip, and rotate the comments, once thing remains, only 8.5% of Major League Baseball Players are African-American.

One point that many have overlooked in the search for this solution was brought up by Michael Kay on The Michael Kay Show on ESPN Radio. Kay suggested that maybe a factor in the decreasing number isn't the lack of interest, or the finances, or even the instant glory of other leagues, maybe the reason is that Major League Baseball doesn't have a true African-American star. 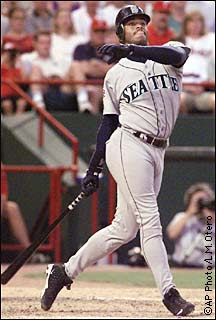 Most of the stars in baseball are players of either Hispanic, Asian, or Caucasian decent. There is a void in recruiting and creating dreams for African-Americans. Eddie Murray and Ozzie Smith are light years away, as kids today only know them as the answer to a trivia question. The days of wanting to be like Ken Griffey Jr. are long gone. Barry Bonds, the man that should be taking on this responsibility, is wrapped up in himself along with too many legal and public relation conflicts to even be considered. And well, Jackie Robinson, sadly, just not enough.

Some opposer's may say that its a cheap excuse for a serious problem. They may claim that a ball player is a ball player. If he loves the game, he will play, regardless of the color on the skin of his favorite baseball player. This might be true. However, its also human nature to want to see faces like yours around. It is human nature to feel as "one" instead of as one. We all like to keep in mind someone that has made it to where we want to go, and has been where we are now.

Hopefully, these players will accept that responsibility. It is a huge one, but it is something that has to be done for the future of the game.

Like Robinson, they have the chance. But who will take the risk?