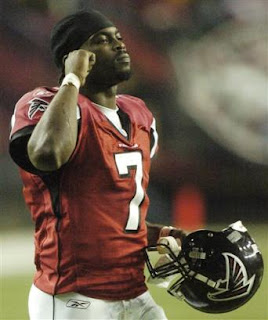 For as long as the story revolving Michael Vick has been happening, I have tried to wait for the dust on this tragedy to settle before forming personal thoughts. After all, there seems to be another update for every time you click "refresh" on CNN's website, or turn on ESPN's Sportscenter.
Michael Vick's actions were heinous and were grounds punishable under the law. Pet lovers across the nation have cursed him to the end of the earth for his choices, some comparing him to Adolph Hitler and concentration camps.

Even though that label maybe a bit brash, I can understand both sides. Yes, what Vick did is cruel, inhumane, and downright disgusting. However, yes, Vick has been a community activist, leader, and figurehead for charities and other charitable organizations in the Atlanta area. My biggest gripe with Vick has been his poor judgment.

Why does an athlete so revered in the city he plays in and making over $120 million in need to be part of an organized unit that breaks federal law? Is the financial payoff that great? Why put yourself in that position to give it all up?

Now, it is reported that he had failed a drug test in early September.

I understand Jim Brown's words when he suggests that we as a society must find a way to rehabilitate Vick instead of making a villain out of him. I agree. Mr. Brown is correct.

However, how can you, when we are in awe of someone that has fallen so fast?

So many bad decisions. Such a short time.