The Irony of Second Chances. 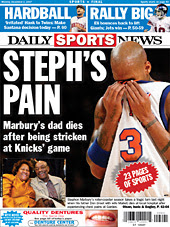 In life, multiple opportunities are as rare as a true ace in baseball or a great big man in basketball. It is a rarity which causes every individual to seek every option in order to capture it. A second chance. Another opportunity. Another attempt to do it differently. We've all made mistakes. Mistakes are a surplus. Second chances are always at a premium.

As rewarding, grateful, and relieving second chances may and can be, they tend to be ironic in their lessons and assuring of their mysteries.

It is no secret that Stephon Marbury has had a season filled with drama and controversy. From testifying in a court case, to being vilified for a lack of leadership, Marbury's image, courage, and heart has been questioned. The New York fan base recently turned their back on the hometown legend as the Knicks struggle out of the gate, and chastised him for leaving the team on a West Coast trip (Though details on his hiatus are still unconfirmed). Through all of that, Marbury is jeered unconditionally as fans cite no heart and no leadership at the core of their feelings.

The surface of this situation seems like Marbury is in need of a second chance. An opportunity to repair his broken image, to regain the trust of New York, and the respect of his teammates. However, Marbury, a man who has lost his childhood mentor, an aunt, and his father in the past month has been playing with a heavy heart, as well as leading and consoling a mourning family through rough times, while putting together solid performances on the basketball court. No one but the good Lord can attest to the mental strength and heart he has shown in the past month. With the news of Donal Marbury Sr.'s passing, all of the doubters, the haters, and the critics backed off - in realization that when they looked to give Marbury another opportunity, they realized that they might be the one in dire need for a second chance.

At TNA Turning Point 2007, Total Nonstop Action Wrestling gave an opportunity to a wrestler, Scott Hall, that has had a great career, but has drummed up a reputation over the years for not showing up at events and other mandatory company assignments. Believing in the wrestler, TNA gave him a shot to resurrect his career after burning bridges everywhere else. TNA also realized the opportunity to cash in on Hall's name and fame for the promotion of the event while forgetting the original formula for its success - new stars. Ultimately, Hall stayed true to his reputation and no-showed the event, ruining his second chance and reassuring Hall's character.

However, the true second chance lies not in Hall's career, but within TNA management to reclaim the fan base it almost lost. TNA has moved away from the younger wrestlers that have built the company for more establish stars over the past few months. TNA almost alienated in its core fan base. Similar to the Marbury's situation, TNA thought it was giving a second chance, when they were the ones that needed the opportunity. All it took was a passionate, non-scripted speech (promo) by Samoa Joe during the telecast to awaken TNA to its opportunity.

Second chances can be a wonderful thing. The opportunity to present one, and the fortune to receive one are wrapped up in the humanity of kindness, compassion and human error.

You live, and you learn. Life is a beautiful thing.