Embarrassing - The State of the New York Knickerbockers 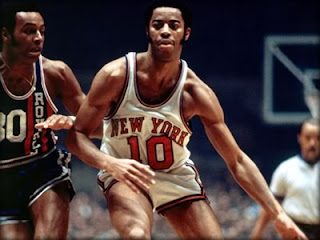 As the tide between the faithful New York Knicks fans and the product that has been presented to us as thus, "The New York Knicks" there has been an outcry of many different solutions, finger pointing and proposals thrown around on how to solve this mess. Long gone are the days of Patrick Ewing, Charles Oakley, John Starks, Anthony Mason and others that left it all on the court every night. Gone are the days of the Red Holtzmans, Walt Fraziers, Earl Monroe, Bill Bradleys, and Willis Reeds. Gone are the days of the Garden being an intimidating place for opponents, the excitement of playoff basketball and the wonder of that million dollar question, can this be the year?

Yes, gone are those days. We are now pleasured with ceremonial, almost traditional jeers for the head coach, porous defense, no heart, and an alienation of the Knick faithful. Madison Square Garden is now just another arena and the New York Knicks are a punchline to every critic (and even analysts) jokes.

So what caused all of this? Is it Isiah Thomas' fault? New York's fault? The player's fault? James Dolan's fault?

To exemplify how stagnant the Knicks have been in there mismanagement of a franchise, here is a quote from a post written in June 2006 (One More Year of Possible Frustration. A Future of Guaranteed Idiocy).

The fact of the matter is the Knicks are a mess. They have become arguably the most embarrassing franchise in sports. A collection of high-priced players with no resumes of winning else where combined with a lack of leadership on the coaching, front office and ownership level is a combustible formula for any sports organization. It's sad. Isiah was indeed looked upon as a fresh of breath air for Knick fans. For years we've dealt with Layden and his antics, and at the time it seemed, anyone but Layden was a plus. Isiah made the move for Marbury which was huge. However, with Thomas followed the sign and trade for Jamaal Crawford and Eddy Curry, the signing of Jerome James and Larry Brown, and the trades for Steve Francis and Jalen Rose. After it all, we find ourselves full circle in this crisis.

And what does Dolan do throughout all of this? Nothing.

A year and half later, here we are, same dilemma, same problem. Dolan does nothing. Despite the fact that every New Yorker calls for the removal of Isiah, the fact of the matter is that this is not entirely his fault. Isiah did inherit an already difficult task of an old overpaid, talent-less roster. He turned it into an young, somewhat dysfunctional roster. Cleaning up Scott Layden's mess was almost next to impossible. Remember, Howard Eisley? Knick fans supported Isiah in his efforts to rebuild the knicks, some defending him to the very brink of this nightmare, including yours truly. Nonetheless, Dolan has allowed his personnel to hire, fire, trade, and spend as freely as they please since taking over the Knicks from his father. When asked to describe the New York Knicks management, Commissioner Stern stated "They are not a model of intelligent management." Stern could not have said it any better. Dolan has allowed a plethora of unintelligent occurrences by allowing Isiah to not only set this glorious franchise back a few more years in salary cap relief, but he has allowed Isiah to disgrace the Garden, and the legacy that follows it. The fact of the matter is this, Dolan was fed with silver spoon two percent of the bottom line of the Cablevision empire in the New York Knicks, and has treated it as such.

He has done nothing.

Despite the ineptitude of James Dolan and our record of last season, Knick fans had hope heading into the '07-'08 season. A shimmer of light that seemed bright a long way at the end of the tunnel. Nevertheless, it was a light that was in sight. We were all optimistic heading into the new season. Goodbye Stevie Franchise, hello Mr. Double-Double, Zach Randolph. Nate improving drastically in summer camp, an improving and confident Eddy Curry, and a rejuvenated Stephon Marbury had Knicks' fans feeling that this could be a good year. The year began on a positive note then quickly fell part due to a series of events.

Sexual Harassment Lawsuit - Reports estimated that the lawsuit could cost Madison Square Garden close to $12 million. The media ate this story up and started a whirlwind which would later escalate into further problems for this organization.

Stephon Marbury Leaves Team - Marbury, reportedly upset over a dispute with Isiah Thomas takes his ball and goes home after Thomas removed him from the starting lineup. Mabury then shows nation that his desire and commitment to his team is as cheap as his sneakers. Captain, and favorite becomes vilified be Knicks' fans.

Neglected Team Vote - After the Knicks team unanimously voted not to allow Marbury to play next game following his hiatus, Thomas brings Marbury off of the bench in what he calls "reduced" playing time for Marbury. Marbury played 36 minutes.

8 Game losing Streak - Although this wouldn't have been a huge factor if not for the next event, Knick fans grow tired and become insulted with another one of Isiah's repetitive fluff press conferences such as this one:

And finally, the event that finally broke the back for Knicks fans - Boston Celtics 101. New York Knicks 59. No explanation needed.

Knicks' fans no longer share thoughts and dreams of being at the Mecca of Basketball for the NBA Playoffs, instead the New York Knicks blog is now plastered with comments such as:

“As a Knicks fan and also a coach, I would fire myself if I were in charge.”
“A sick, pathetic joke. And that’s just the coach and the owner.”

“It’s time to start asking whether any franchise in NBA history has embarrassed themselves more than the 2007 New York Knickerbockers.”

And although the season is only 1/4 over, and most of the East are statistically in the same situation, this isn't exactly a forfeited season. The season can be saved. However, for this to happen the Knicks' will need two very important qualities - leadership and consistency. Consistency is dependent on the former, and with Dolan and Isiah proving they are incapable of these qualities, as well as the sudden departure of Malique Rose (and who can blame him?), one will have to emerge from the current group. As of this moment, Jamal Crawford is the pick of yours truly.

On the optimistic side of things, as most fans, it is hard to give up on this team. There are 62 games remaining, and Wednesday is a new beginning. After receiving a vote assurance from James Dolan (again), Isiah, a man who seems to have more lives than a cat stated:

One has to applaud Isiah for his words. For once, he isn't reiterating the same jive, or stating his usual "loving and trusting one another" fluff. He speaks the truth. The New York Knicks and Isiah Thomas are together until death do they part. Unfortunately, for us, with James Dolan's leadership, Thomas maybe the one that survives.