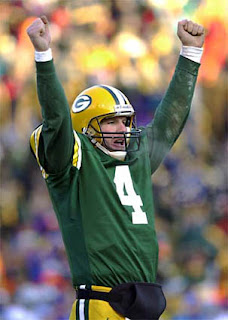 Brett Favre's run in the National Football League is finally over. After 17 seasons, what else can you say about Favre that has not been said already by reporters, newscasts, documentaries, sport columns, talk radio and passionate fans of all sports?

There is one - humility.

Favre was a man that exemplified a true essence of sports. A nakedness without the contracts, the endorsements, the commercials, the glitz, the glamor and all the baggage that accompanies professional sports today. Favre embodied a charismatic persona that involved class, hard work, dedication, toughness, imagination, and heart.

However, it was his humility that poured through his passion for the sport over everything else. He had an uncanny ability to live in the moment. Never once did he take any situation or any moment for granted or out of its proportions for self promotion or self-indulgence. His ability to understand failures to overcoming adversity, Favre remained calm and cool through it all. Unscathed through his experiences, Favre always put the love of the game before him.

The game was first.

Much can be said for his legacy throughout the sport and about the way he played the quarterback position with such flair. However, Favre's connection to the American people was much more than a number 4 green jersey lining up and taking snaps every Sunday, it was a blue-collar, child-hearted dream coming to fruition, as Favre played the way anyone would in the confines of their backyard, slinging, running, smiling, excited, improvising, and passionate, as if nothing else mattered. Because in his eyes, nothing else did.

The game was first.

With Favre now gone, is there anyone else that can replace his status in Americana? Looking across the broad spectrum of sports, and the thousand of athletes that compete each year, as of now, the answer seems to be no one.

A huge gaping whole now exists in the sports world.

Favre will be missed for his legacy, for his realness, but most importantly, for his humility.