36 years of setting the bar.

In any industry, such a feat would be grounds for an individual to be labeled as one of the greatest of all time - if not, the greatest. Ric Flair for 36 years has traveled the world, from Tokyo to New York, from Africa to Puerto Rico, all corners and within, entertaining wrestling fans abroad. Each and every time he stepped through the curtain, he gave the audience, whether thousands, or a mere few hundred, his blood, his sweat, his tears, and anything else that he could.

His professionalism was Gold.

For 36 years, Flair put his body on the line in an unforgiving business that so many love, and so few appreciate. He excelled and shined in a business, for which the horrors of the labor exceed that of any professional sporting season, and did so without a freakish physique, but with natural ability and pure guts.

His matches were Gold.

For 36 years, Flair entertained us behind a microphone and a camera, grabbing every viewer, every fan, every fellow wrestler with his charisma, with his style, and no pun intended, with his flair.

His words were Gold.

For 36 years, Flair has given back to the business that has made him a legend, showing younger wrestlers the know-how of the industry. He honors, loves and respects professional wrestling. In an industry where respect amongst your peers is so rarely evident, Flair left the business a much better one than he entered over 4 decades ago, earning him admiration by many wrestlers and officials throughout the world.

His character was Gold.

For 36 years, Ric Flair did what he loved...better than anyone else in the world. 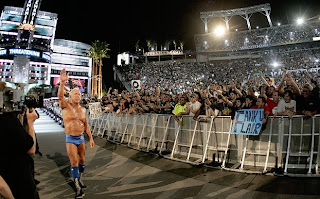