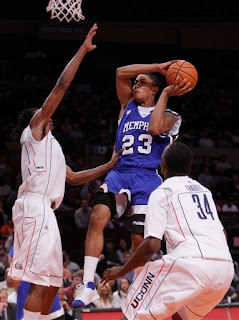 On the night of the 2008 National Championship, there are rumors that NBA Commissioner, David Stern, and NCAA President, Myles Brand are in agreement to require players to stay in college for at least two years of college.

Immediately, many are quick to say the idea proposed by the top two dogs is brilliant. After all, it enhances the NBA game with more seasoned players, and it keeps the NCAA from one and done wonders such as Carmelo Anthony, Kevin Durant, and Greg Oden.

How can it be wrong? It's a no brainer, right?

However, one has to question this pact as it reeks of alternative motives. The agreement itself is grounded in none other than cash. An ability for the NCAA to develop and keep these top-notch stars that will be playing in a basketball arena near you soon, and a chance for the NCAA to become a sufficient breeding ground for the NBA. Both parties win, and will allow for a stronger product.

Never mind the fact that you can be sent off to war, but not be allowed to play in the NBA.

Nevermind the fact that it violates the right for a legal eighteen year old to pursuit his or her career.

Never mind the fact that it compromises the American way.

It's all about Ratings, ticket sales, and merchandise.

However, deeper overtures lie in this topic that many are afraid to tackle and/or be susceptible too. That is the issue with the NBA and its image. It is not a secret that Stern has been trying to clean up the NBA's image, and part of that is in fact, the maturity of the young inner-city male, most notably African-Americans. A denial of that is an example of pure and blinded ignorance.

An increase in the age limit is in fact a proponent to curb immature behavior in the NBA rather than improve performance.

After all, it is obvious for the three year rule in football - a physically demanding sport. However, what separates basketball, from baseball, volleyball, golf, hockey, or even bowling?

The answer is simple - besides performance enhancing drugs, the other sports do not have an image problem with negativity. Football does, but as we all know, football gets immunity from all negativity in this nation.

Nonetheless, another two years under a great collegiate program can help a young man develop personally, emotionally, and spiritually to a point that can match or exceed that of the NBA's culture. Stern is no dummy. A marketing genius such as Stern realizes the greater welfare of the league lies in good character rather than great players.

To say that Stern's intentions are racially motivated may be a bit of a stretch, however, it may not be too far from the truth.