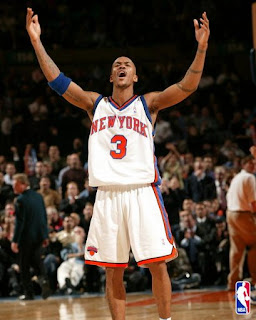 The New York Knicks are on the road to recovery. Stephon Marbury's career is on life-support.

The franchise which has been slowly dying in the past years, and which was bludgeoned severely by a weapon with the hand prints of Isiah Thomas, has begun its slow climb back to respectability. Hopefully, one day amongst the elite again.

Nonetheless, as fast as they have become credible, the organization has presented several crossroads for many within the organization, especially Stephon Marbury. Upon hearing of new head coach Mike D'Antoni's hiring, Marbury immediately called the newly hired coach to welcome him to Gotham. After all, Marbury more than anyone else is excited for a replacement for the friend gone foe, Isiah Thomas. That is because, Marbury more than anyone else knows that this might be his final shot to not only save his name and career, but himself.

With Mr. "Seven seconds a possession" planning to inject his philosophy into the Knicks mentally lost roster, Marbury promises to do whatever D'Antoni requests to win. And D'Antoni, who has been known for a fiery temper will do just that. The problem is, we've heard this same old swan song from "Starbury" before. After running several solid ballers out of the Garden, making promise after promise for every incoming coach, Marbury has worn out his homecoming with the New York Knicks' faithful. He has used up his coupons for homestyle cooking once he became buddies with the now exiled Thomas. Regardless of the outcome of that relationship, Marbury's antics as a Knick have cost him his career, and that can be solidified this coming season.

Mark my words - this is Stephon Marbury's last chance.

What was once a dream for Marbury, has become a personal nightmare. Nevertheless, there seems to be one last hope of resurrecting Marbury's career in New York, and it comes on a formality. Marbury is owed $21 million this coming season, a contract which comes off the Knicks payroll. It's the type of space new President Donnie Walsh is looking to create for the oh-so dreamy 2010 free-agent class. For that reason, and that reason alone, Marbury has been given a chance to don the orange and blue one more time on the Garden floor.

It is either now or never.