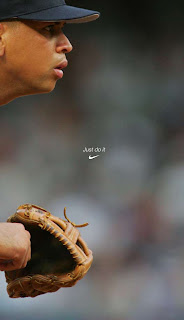 And in a culture during the late 90's and the turn of the century, that is what Alex Rodriguez did. He succumbed to the culture of Major League Baseball and engaged in performance enhancing drugs (PED) from 2001-2003.

For many that notion may still not resonate so soundly and smoothly, as it is another example of the wide-use of PED's in the sport. It is also important to recognize the inability to predict or select who was guilty of using, and who was not. In so many cases, Major League Baseball and the public has been unjustified in lashing out against athletes, trainers, teams and others without clear evidence, justification, or reasoning.

In A-Rod's case, allegations of steroid use was the free fall that many in the public have waited for, and have so eagerly anticipating.

After failing to deliver in the clutch (again), media outlets needed something fresh, something more regarding A-Rod, and they found it in his private life. From his affairs, his divorce, to even a quiet afternoon sun bathing in Central Park, we need something to spin on A-Rod. The latest was Madonna. The pictures and stories landed all over the nation regarding his newly found relationship with "The Material Girl". When that story's well ran dry, we all indulged ourselves in Joe Torre's book, "The Yankee Years". A story that could have potentially sent everyone into camp happily with controversy, was then completely overshadowed by A-Rod's use of PED's in 2001, 2002, and 2003, his years with the Texas Rangers.

First of all, our immediate obsession of spewing hate and negativity towards anything "A-Rod" began when multiple writers and media facets ran stories on A-Rod before he had an opportunity to address the issues. Reports ranging from "A-Rod Loses Legacy" to "Yankees should Rid themselves of A-Rod" are quite ignorant in perception, justification, and respect.

In fact, of 104 players that were tested anonymously, and privately, with results set to be undisclosed, it seems quite bizarre that A-Rod's test was leaked. By passing the MLBPA's inability to destroy the test results to protect its member, it seems very likely that someone either sold A-Rod out, or had an agenda in leaking the story to SI.com.

Seriously speaking, on this day, February 9th, 2009, A-Rod has admitted to using PED's, and has cited the pressure of becoming the highest paid player in history, being naive, inexperience, and his stupidity as being reasons and causes for the usage.

And in retrospect, can you blame him?

The pressure of signing such a huge contract at such a young age can cause immense pressure. It's not a cop out, he cheated, yes, but the man is human. Every individual has resorted to actions out of character in times of desperation. Rodriguez did just that. It's been well documented regarding his "psyche", and who is to say that may not be related to the pressure?

Also, considering the culture of baseball then is a huge piece of this story. Baseball culture in the past was that of free experimentation due to a lack of structure and law for PED's by Major League Baseball. It was the time. Using steroids now, with all the science and knowledge of what it does to you long-term is foolish. We understand now. We are more educated. It is very similar to the way we look at those who experimented with drugs in the 70's and 80's. It was the time. However, use of those same drugs today are considered unwise.

Yet, we continue to clamor and complain in our efforts to vilify A-Rod. There is no denying, that he has done something illegal. He cheated, period. However, so have many of our heroes from that era. And for us to allow some to be forgiven, and a few to be held accountable based on achievements and talent, and not their character, is a case of double standard on our part.

In a piece written in the past (There Should Be More to "A-Rod" For Alex Rodriguez), yours truly touched base on the potential of Rodriguez, A-Rod as a brand, and his legacy. A-Rod is at a cross roads in his career. He has handled this demon the best way he can, by apologizing. We are a very forgiving society as evident by Kobe Bryant's career, Andy Pettite, and Jason Giambi. Yet somehow, somewhere, we became so obsessed with A-Rod, that reaching this point is a low point for A-Rod, and for our society as well. We are obsessed with picking out his flaws, and turning him into a spectacle. And we've done it.

Rodriguez's best avenue from here is to shed light on his mistake, own up to it, mind his business, forget about what people think about him, and continue doing what he does best - play baseball.

He has cheated. He has apologized. He, hopefully, will move on.

Unfortunately, for us, we haven't.