It's one of the few catchy phrases for the 2009 World Baseball Classic. An event, that was created, then modified after the inaugural 2006 WBC to bring the game of baseball to an international level. "The Classic" has raised many flags in the past due to its risky nature for players and controversial timing, but has quickly become a growing phenomenon amongst the baseball community, as well as sports fans alike. And despite the many critics that fault the classic for removing major league players from spring training camps, pushing pitchers very early in the year, attempting to replace the Olympics, and placing many high profiled players in harms way before the Major League season begins, the WBC has proven to be highly successful for five distinct reasons.

Many critics slam baseball officials and the International Baseball Federation for sanctioning such an event. After baseball and softball were eliminated from Olympic competition starting in 2012, plans for creating an international event began, but one that will use the best players from around the world instead of amateur athletes. Since then, the World Baseball Classic has produced an epic inaugural tournament, an interesting 2009 tournament (so far), and plans for expansion to 24 teams for the 2013 WBC. With a continuing feel of excitement and exclusivity, the WBC has the potential to become to baseball, what the FIFA World Cup is to soccer (futbol).

Despite baseball's growth over the past decade due to rising stars and the longball, it has been no secret that the game has had it's shares of black eyes along the way as well. The use of performance enhancing drugs, suspensions, and the fall of many heroes can be added as well. However, baseball is still alive, and well - and still growing. Despite it's growth, baseball still falls behind the mighty powerhouse that is the National Football League in the United States, and the world domination that is premier soccer. Nonetheless, the WBC allows the game of baseball to reach new corners of the world, and gather interest from new fans who might be interested due to the international competition. We always see a similar result every four years in the World Cup with new fans taking a liking to the sport due to the event. Hopefully, after a few years of brand awareness and excitement, the WBC can help create excitement, and new fans to the sport. 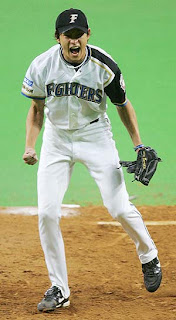 A personal favorite, an integral part of the WBC's success is due to the opportunity to view new talent. Whether they play overseas in other leagues, in the minor leagues, or part of grassroots academies, viewing the talent from each country, their development, and their potential for stardom is exciting as a baseball fan. Japan's young phenom in Yu Darvish; Cuba's unbelievable national team, along with their star infielder Yuliesky Gourriel; Korea's, Tae Kyun Kim; and the development of talent for team Italy, Australia, and South Africa are all interesting. Viewing games in early March with playoff intensity and fresh talented players is a great recipe for success.

International competition is all about pride in your country. The WBC has created a platform with such passionate baseball hotbeds as Japan, Korea, Cuba, United States, Mexico, Puerto Rico, Dominican Republic, and Venezuela participating. Add in the story lines of Japan looking to repeat, the United States, Dominican Republic, and Venezuela attempting to recover from previous embarrassment, and many other countries looking to prove themselves, the WBC creates a pride in one's country, athletes, and belief that it is the world's true baseball powerhouse.

As we near the conclusion of round one, we've witnessed many upsets, close calls, and intense games. The WBC has proven once again, despite the usual criticism in all languages, that it is indeed a viable event in one - baseball.