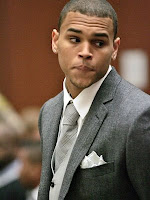 Chris Brown had it all. Youth. Talent. Fame. Wealth. Good looks. Considered a prodigy in the music and dance industry, Brown has accomplished more than most performers before the age of twenty. Being compared to many greats, such as Michael Jackson, as well as ringing endorsements from other current stars, Brown was destined to follow suit.

The super talented Chris Brown has seen his luck take a drastic turn recently as the world was let in on his flaws as a person. As Brown, and the rest of the world awaits his arraignment and further details regarding his abusive relationship with fellow talented performer, Rhianna, he has been fortunate enough to dodge the full wrath of our society and media.

Sure, he has seen his endorsements suspended.

Sure, he has seen his songs pulled from the airwaves.

Sure, he has seen his image plummet.

Yet, Chris Brown knows he can survive this. In fact, many in the music industry are sure he will. We've seen it so many times where musical artists use their character down flaws as inspiration for albums and singles which help resurrect their careers. Brown's case is no different.

Especially, since he has been let off so easy.

Brown's actions are almost politicized in reasoning for his acts. The claim of his parent's abusive relationship and it's effects on Brown are outrageous and laughable. His ability to escape the front page headlines mirror acts of Houdini himself. A downright miracle.

Yet, a man in Alex Rodriguez, who has admitted to his mistake, one that harmed no one else but himself, is shunned, ostracized, criticized, and vilified for everything and anything.

Brown committed one of the most cowardly acts in the human race. Beating, and abusing a defenseless woman shows an inflated ego and a lack of character. He's another example of questioning the line between talent and character amongst our athletes, performers, and entertainers in our society. Where do we draw the line?

Brown deserves much more for his transgressions. Rhianna deserves justice. Domestically abused women around the nation deserve action and answers.

However, much like his life and career, Brown will get off easy. He'll make an album, go platinum, and win a few awards. All will be forgotten.

All the while, Alex Rodriguez will remain public enemy #1. Go figure.