Wrestlemania 25: The Evolution of Two Greats

April 05, 2009
April 4th, 2009 marked the twenty-fifth anniversary of the event epic that is Wrestlemania. For the past two-plus decades, Wrestlemania has evolved from a vision from the genius mind of Vince McMahon into an event more revenue producing and in-demand for cities in some cases than the World Series, Stanley Cup Finals, NBA Finals, Final Four, or even, the Super Bowl.

Wrestlemania, through its evolution has provided many memories and moments that will forever raise the eyebrows of wrestling fans. From those that step up on the grandest stage of the wrestling calendar, to the celebrities and Hall of Fame inductions, Wrestlemania weekend has grown into a week long event (now including other wrestling companies as well) anticipated by wrestling fans throughout the world.


However, despite the huge silver anniversary of this great event, there was another evolution that the wrestling fan is emotionally, and historically invested in, and ironically, that evolution was on display at Wrestlemania 25 as well. 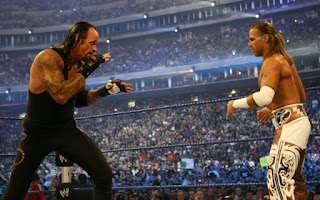 Of course, I am referring to Shawn Michaels and The Undertaker.

Both men, who are embedded in the fabric of the WWE, stole the show at Wrestlemania 25 in a match which will be highly regarded as one of those many "Wrestlemania moments" fans will discuss for years.

However, despite the match, the fans have seen Michaels and 'Taker's careers progress from their rookie years, through the highs and lows, and into the very present. It is an emotional ride that each and every fan has been on. Every week, every month, every year, we invited these athletes, these characters, these people, into our homes, into our lives, and into our children lives. We cheered their success, jeered some of their decisions, but ultimately respect the effort they give to entertain us every night - because they do bring it, each and every night.

And for most of us, we were with Michaels and 'Taker each and every step of the way. In some ways, they have become a part of our childhood, and our lives.

And as their careers turn that corner, and both begin to age, the match that we all witnessed at Wrestlemania 25 was a testament to their careers, their fans, their legacies, and to the wrestling industry.

All, who were privileged to see the evolution of The Undertaker, and Shawn Michaels. For there will never be another like either one of them.