The Death of Michael Jackson 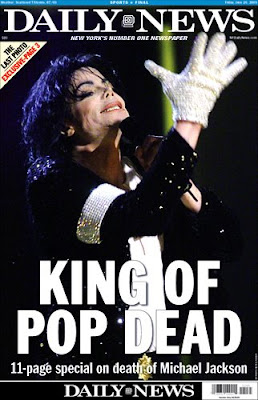 It's a headline so shocking, that it seems unbelievable. Despite a tumultuous past couple of years, it always seemed that Michael Jackson would be around. He was part of our childhood, our upbringing, our lives. He was pop culture as we knew it. Now that is no more...and it still feels a little surreal.

(UPDATED 6/28) -There is not much that you can say regarding the events, or tragedies that have occured this week. As the years go by, and the experiences continue to confirm the valididty of deaths coming in groups of three, there was an eerie feeling upon hearing the hospitlization of Michael Jackson following the deaths of Ed McMahon and Farah Fawcett.On Thursday June 25th, 2009, Michael Jackson was pronounced dead. His death, one of the few moments where time stood still, will coincide with history, personal reflection, and precise location, the same way his music did. We all will remember the time, day, weather, location and events when we heard of Jackson's death.

Jackson, the most influential, gifted, and talented musical performer of all-time, paved the way for many musical artists today and changed the tide of musical expression through his dance, flexibility and creativity. Despite the end of a remarkable career, Michael Jackson's legacy will live on through his music, which will forever be timeless.