The New Digs In New York

June 12, 2009
From 1923-2008 Yankee Stadium was the premier sporting venue in the United States. With various memories and moments, it connected with everyone that has visited, toured, or even driven by the "House that Ruth built." About 8 miles across the bridge and down the Grand Central Parkway, Shea Stadium once stood as the ugly, horrendous, yet very useful, second stadium of New York City. Used in the past for football andconcerts, and most famous as the home of the New York Mets, Shea never appealed to many, other than Chipper Jones of the Atlanta Braves.

Despite the memories, father time marches on, and both stadiums are no longer in existance. New York City unveiled two new ball parks for the 2009 season. As the season nears the half-way mark, yours truly finally had the oppurtunity to view both ballparks. After my experience, personal assessment seems to fall in line with critical reviews.

Despite the grandeur that Yankee Stadium is, by no means will it have the same feel of it's original version - and it didn't. Despite the unbelievable presence that is felt when walking up to the monumental structure that is the "New House in the Bronx, the aura and goosebumps are no longer. However, such feelings will come over time as the organization and its fans build and create new memories in the new building.

Nonetheless, the new house commemorates and expresses Yankee Pride in a classy way via The Great Hall. Upon walking in, you are bombarded with banners, memorabilia, videos, and other elements that remind you of where you are - Yankee Stadium. As you make your way towards the seat, you cannot miss the return of the friese, the humongous LCD screen in center field, and its two surrounding screens which provides you with every possible stat and score for the game, as well as other games around the league. 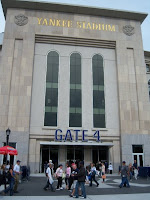 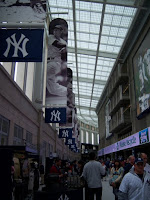 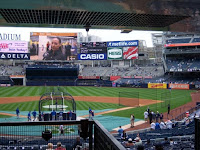 Despite it's early reputation for playing like a little league field, the new Yankee Stadium is a modern-art gem that will only grow in exclusivity once the memories come with the years.

Over in Queens, CitiField stands next to a rubble that once was Shea Stadium. As you walk up to CitiField, the building reeks of old school flavor, patterned after the old Ebbets Field. As you enter, that retro feeling continues into the park with the main entrance dedicated to Jackie Robinson, a field that is unique with its right field upper-deck hangover, and its backstop brick layering. CitiField is an amazing place, and for Mets fans who have spent their entire baseball lives over at Shea, it feels heaven-sent.

However, critics of CitiField have made it known that the stadium has very little Met-character to it, a criticism yours truly agreed with. The field, despite its beauty and retro-style, has very little Met-homage and/or feeling to it. In fact, walking around the stadium sometimes feels like the home of another team (hint: Dodgers).

Although, both stadiums have their positives and setbacks, the new Yankee Stadium and CitField are stadiums that are exciting and modern, with a touch of retro that make them both must-see sites. We are fortunate to be in a generation where New York City is home to two new ball parks, with a new football stadium on the way, and the renovation of Madison Square Garden scheduled to begin shortly. It is essential to harbor the memories from the old buildings, while experiencing the new structures, that will embrace new memories well beyond our lifetime.

All photos courtesy of snapshots.