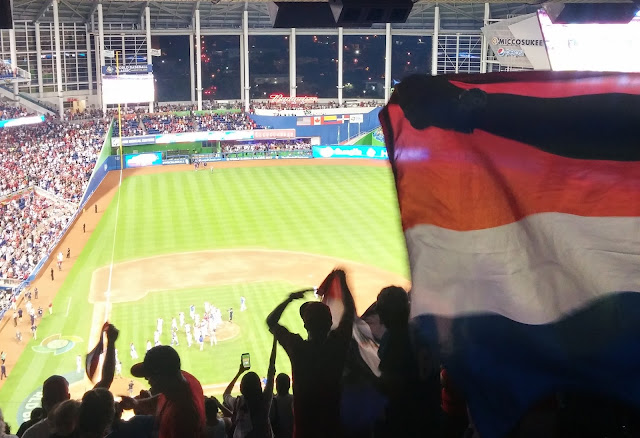 I found myself in a mix of emotions. Disbelief. Frustrated. Excited. And overall, in awe. The World Baseball Classic and my experience over this past weekend spanned the realm of each of these feelings, and much more.

I have to admit, I had no idea what to expect. Filled stadiums? Lack of energy? Constant Vuvuzuelas? Ironically, my time in Miami at Marlins Park provided, much like the emotions, all of it. The two games I attended, USA vs. Dominican Republic and USA vs. Canada, were tremendous games to attend, and quite frankly, an experience I would recommend for any baseball fan.

Of course, if you follow this blog, or the Twitter account, you know that I am a huge fan of the World Baseball Classic. I love the culture of the tournament. I love the passion it produces. I throughly enjoy the styles it produces. And honestly, I'm all for competitive baseball as early as possible. Especially when my New York Knicks are doing typical New York Knicks things.


With that said, here are some quick tidbits from my weekend in Miami: 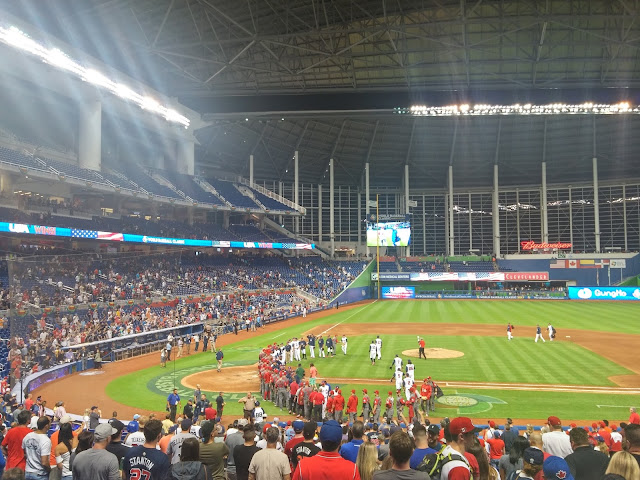 I'm starting right out of the shoot on this one - Americans drive me nuts. Not the players, because it's quite obvious in this rendition of the tournament, the members of Team USA are pumped and ready to win this thing. But where is the support for this team? Seriously, where the hell is it?!

I sat last Friday night and watched Marlins Park set a new attendance record with a raucous crowd supporting the Dominican Republic. There was dancing, horns, drums, tambourines, chanting, and just about everything to make noise. DR fans cheered every moment of the game! And you know what, it was awesome. So infectious. At times, you couldn't think. At times, the building shook.

Much love to those USA fans gave a damn and helped carry the void at that game, especially in the rout of Canada. But really, overall, I just don't get that supportive vibe from Americans the way I do from my Dominican friends, my Venezuelan friends, my Puerto Rican friends, and even from the enthusiasm that comes across the television from the Japanese crowds.

In full disclosure of my feelings, American fans are the first to tout their mantra of "sanctity of the game" and spewing the nonsense of ridiculous unwritten rules. Seriously, I think we're the only country - overwhelmingly - that doesn't care. It's as if we arrogantly believe the game is ours. As you probably can tell, I'm still very disappointed in the support for Team USA.

Again for those who did come out and carried the loud USA chants along with me, my hats off to you. 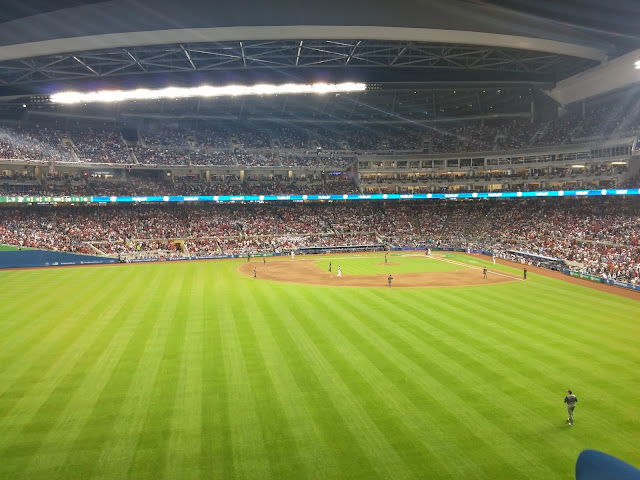 This sort of carries me into touching on those unwritten rules within the MLB culture, but regardless, this tournament is super, super fun. The Caribbean teams just do it so well. Baseball is fun, and they treat it as such. Like the many Americans who joined in and danced and partied during the game, it was a clear awakening that possibly, we take the game too seriously.

Much props again to the boys of Team USA who have been fired up from the very beginning. You can tell it means something to them. And yes, even they are having fun with this tournament.

Take The Time to Waste the Moment

I've been to a lot of baseball games. I've now been to a lot of ballparks. Nelson Cruz's go-ahead three-run home run in the bottom of the eighth against Andrew Miller might be one of the greatest moments I've ever experienced. Possibly in sports - ever. It sucked because I thought it was the USA's night. But my goodness, it was a special moment.

Manny Machado in person is the only way to really do his talents justice. The kid is so good.

While the tournament does provide a stage for the game's greatest players, it also provides a stage for a mix of players. There is something cool about top prospects playing among pros. And yes, there is something well, interesting, about retired guys like Ryan Dempster and Eric Gagne coming out of retirement against those same pros. The array and mix makes for a peculiar and interesting game.

By the way, what was with Canada throwing Ryan Dempster every opportunity they had? Is he the ONLY reliable pitcher the country has?

The World Baseball Classic is Cool

Simply put - this tournament is cool. There are legs to it. Again, American fans haven't bought in, but again, I'm not sure why not? I would love to hear from a fan who hasn't already. I'm not buying the we-haven't-won-it-yet excuse either.

Regardless, the whole feeling in Miami was special. The city was aware, the neighborhood was aware, and it felt like it should - a gathering for baseball, and nothing else.

With all of that said, Miami was awesome, and so was my first experience of the World Baseball Classic. I highly recommend the experience, and urge you to make plans for 2021.