'Understand, Learn, and Experience: Ten People to Spend 15 With'

December 21, 2006
Life is about understanding, learning and experiencing. To harness and benefit from these qualities, we seek others who have understood, learned, and experienced. We seek their mind, their guidance and their teachings from those that are where we are, where we are going, and where we hope to never end up. However, there are those that we wish that we can have fifteen minutes to pick their brain. When asked that proverbial question, "If you can meet one person, dead or alive, who would it be?", these would individuals appear on that mental list.

With that said, I have compiled a list of individuals I would like to spend fifteen minutes to simply ask questions about their experiences, and life in general.

10. Darryl Strawberry - This seems like a shocker. However, Strawberry could have possibly been one of the greatest baseball players ever. His demons got the best of him, and his baseball career was basically wasted. The chance to ask Strawberry about his career, his addictions, his relationship to son, DJ, and his current efforts to better the lives of young athletes that get wrapped up in the fame would be interesting.

9 . Oprah Winfrey - The richest woman in the world. Oprah's take on her charities, her career and life in general would be beneficial to any aspiring businessman...errr, woman in her case. 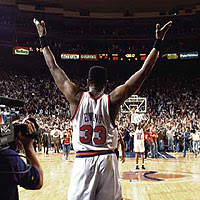 8. Bret Hart - One of the greatest wrestlers alive, from one of the most historical wrestling families ever, now retired and far away from the business that made him and his family. Questions would include his career, his brother's death, his father's death, how wrestling built and tore his family apart, the current state of professional wrestling and what he's learned from the business.

7. Barry Bonds - There is no need for a description on Bonds. It would be interesting to see Bonds' views on the public, their opinion of him , his place in baseball history and how he wants to be remembered.

6. Patrick Ewing - The ability to just hear stories about his career and playing at the Garden would be enough. The question of what the Knicks needed to surpass the mighty Chicago Bulls of the past would definitely be asked.

5. Rudolph Guliani - The former Mayor of New York City is a man that I admire and espect greatly. His hadnling of September 11th, and his effort to help NYC in his eight years as Mayor were remarkable. Questions would include Guliani's experiences as mayor and his interest for the presidency of the United States.

4. Jay-Z - The King of New York. What more can I say? Jay-Z, Hov or Sean Carter, whatever you call him, he has meant so much to the borough of Brooklyn, and the city of New York. The ability to hear about his journey from the Marcy projects to being worth over $300 million is a story that must be heard.

3. Michael Jordan - Yes, I hated MJ, but that's only because he torched the Knicks every chance he got. Poor Patrick could have been wearing a ring or two if not for Mr. Jordan. However, you have to respect possibly the greatest athlete to ever walk God's green earth. Fifteen minutes to talk to him is priceless no matter what you discuss. 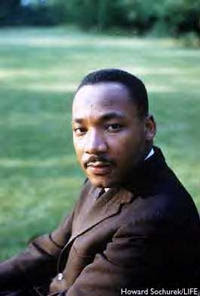 2. Dr. Martin Luther King Jr. - One of the most influential people ever. As a huge fan of Dr. King, it would be really beneficial to anyone to learn his teachings, and put to practice his teachings, dreams, and efforts. If the chance was possible, questions would include life in the 50's, the civil rights movement, his thoughts on life, and his opinions on today's world.

and finally, the person I would really want to meet...

1. Jesus Christ - I'm not sure what I would say to him. I would probably be in awe for the entire fifteen minutes. Nonetheless, he will always top this list.

Spike Lee - Movie Director and loyal Knicks fan. "How about those Knicks?"

Chuck Liddell - UFC Lightheavywight Champion. "How does it feel to know you can knock just about anyone out?"

Any member of the NYPD or NYFD that took part in 9/11 - Their stories never get old.

Alex Rodriguez - Third Base, New York Yankees. "When we boo, how do you handle it?"

Beyonce Knowles - Actress/Singer. "Will you marry me?"

Stephon Marbury - Point Guard, New York Knicks. "How helpful has Isiah Thomas been?" "Is there more to expect from the 'Starbury' line?"

George Bush - President of the United States of America. "What exactly are you doing? Seriously."

Tupac Shakur - Rapper/Actor. " What has happened to hip-hop?"

James Dolan - Owner of Cablevision empire (Cablevision/Knicks/Rangers). "Do you know that New York hates you?"

Terrell Owens - Wide Receiver, Dallas Cowboys. "What is wrong with you?"

Steve Bartman - Infamous fan. "What were you thinking?"