Do Something Right: Isiah's 'One Year' continues... 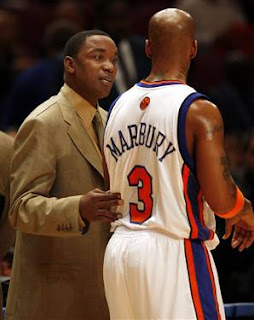 The New York Knicks. That statement alone used to be enough to represent prestige, tradition, honor and excellence. Today, it represents an ongoing circus of drama, poor basketball, and a skid mark on the World's Most Famous Arena.


Yes, the New York Knicks are at it again. It seems whatever they do, they can't do it right. Saturday's melee in the Garden was yet another example of this as the Knicks continue to mess up and give newspapers and sport writers more ammunition to fire away on the barely pulsating franchise. The replay has been shown many times in various angles and speeds, but no matter how you view it, the Knicks have done wrong - again.

Fans are upset. Front Office is a wreck. Team is in disarray. The Garden is empty.


We blame Isiah Thomas. We blame James Dolan. We blame whoever has finger prints on this tragedy.


Nonetheless, I will be that guy to stand up for Isiah. Although this is his team, he inherited an aging, nonathletic and huge salaried roster. He turned it into a young, gifted, random...high salaried roster. Yes, he did bring in a coach that proved to add to the bad chemistry, but Isiah has a vision that I truly believe has not been completed yet. However, Isiah has one year to bring that vision and reality together. One year, to prove to everyone that not only is he a good executive, but this team has the makings of excellence in the future. So far this season - not good. After 26 games, the Knicks stand 9-17.


The Knicks have endured jeers from their own fans, received scrutiny from the media, have been the victims of many punch lines and are written off by many NBA analysts. It's an interesting situation rarely seen in sports. A team fighting not only critics and analysts, but it's own city, its own league, and their own selves.


Saturday's fight in the Garden showed that this group refuses to be broken. After being embarrassed by a Denver Nugget team, the Knicks showed some pride similar to the old Knicks teams of Ewing, Oakley and Starks. Despite the unfortunate events (and I do mean very unfortunate), this might be what the Knicks needed.


Let's see where this saga continues. If the Knicks prosper, the fight in the garden will be looked at as the turning point. Isiah's "one year" has the potential for an unforgettable story...


...that is if they can do something right.