There Should be Much More to "A-Rod" For Alex Rodriguez 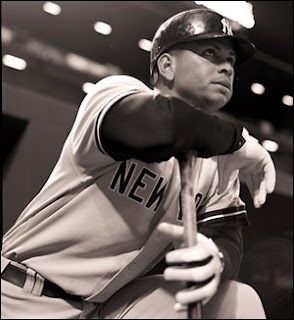 Is it possible for A-Rod to make more money?

And isn't that thought scary?

After all, he is potentially the greatest player to ever don a Baseball uniform, and according to the latest results, one of "The Greatest Athletes in the World."

So you would think that he would (and should) be fairly marketable, right?

Currently, A-Rod is the ninth highest paid athlete in the world behind the likes of Lebron James, Kobe Bryant, Flloyd Mayweather, and some guy named Tiger Woods. Rodriguez's base salary is in actuality the highest at a whopping $29 million dollars per year. However, he only (and let's use that term loosely) makes an additional $6 million in endorsements, an area others obviously thrive in.
It is hard to believe, a guy like Rodriguez who is the best in his sport, similar to the likes of Woods, James, Mayweather, and Bryant, cannot step to the foray of the mainstream media. Rodriguez, who has turned down endorsements in the past (commercials & photo shoots) to concentrate on baseball, has stated that he does not want to venture in such projects that will take away his time and focus from the sport he loves.

Nonetheless, it almost seems like a failure on the end of Major League Baseball for not capitalizing on Rodriguez's abilities, and potential. For a sport which has seen its homerun king surrounded by drugs and steroid allegations, its former poster boy wither away to a below average ball player, and a vacancy for the face of the sport, it seems only natural, almost a given that Rodriguez will fill that void for Major League Baseball.

What commissioner wouldn't want to market the game around it's best player and even one of the "World's Greatest Athletes?" David Stern and the NBA seem to be doing just fine with fellow "greatest athlete", LeBron James.

A-Rod should be more than just a baseball player. He should be a brand. A shoe. A glove-line. Athletic wear. A video game. Something more.

A guy like Alex Rodriguez who is fairly good looking, a physical specimen, a tremendous athlete, a multi-time all-star, the youngest player to hit 500 home runs, a three time MVP, and current New York Yankee...yup, there should be more.

And he'll see it is as well. As much as he is, has been, and will be...there can be much more.
Forget the money. How scary is that potential?