161st and River Avenue: Where I Fell In Love 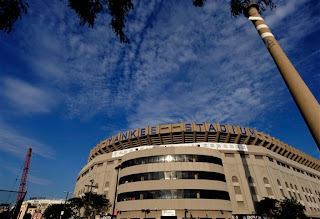 After the lights were shut off for the last time on September 21st, 2008 in Yankee Stadium, many have reported and reminisced on the history of the historic stadium. It's been written and talked about everywhere. The perfect games. The legendary players. The Papal visits. The football games. The big fights. The world series games. Yankee stadium was the stadium.

And like many, yours truly will be sad to see the stadium at 161st and River Avenue go. It was a place that I too grew up with.

There were many, many games in the early nineties watching a putrid Yankee team, yet rooting for my favorites in Mike Stanley, Jimmy Key and my main man, Don Mattingly.

There were many arguments of how much the Yankees were going to miss Roberto Kelly (Only to be replaced by some guy named Paul O'neil).

Getting excited about Kevin Maas.

Accepting that Kevin Maas was not the guy.

The dynasty years of struggling to find tickets. Yet, feeling like whatever seat in the house it may have been, it was all worth it to watch Bernie, Tino, Jeter, Pettitte and Posada with Mo shutting the door.

The many birthdays, friends, family and myself, celebrated at the stadium.

The smell of grass and hot dogs mixed with the sight of blue, and the sound of obnoxious new yorkers all blending for the perfect atmosphere.

And the thousands of other memories that are currently slipping my mind due to the flood of joy running through my heart.

Nonetheless, most importantly, I will miss the stadium because it was the place where I learned and fell in love with the game of baseball.

Although, I will never be able to experience the chills of walking through that blue tunnel and seeing that big green field again, the memories, and influences that Yankee Stadium has had on me throughout my life will never fade away.