A Life of Glory: One of Simplicity and Truth 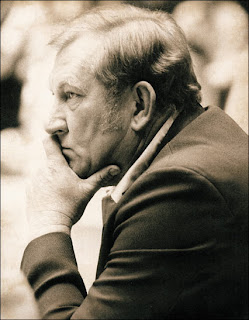 38 Seasons with the University of Texas-El Paso.

With all those accolades, many still know him as the coach from the Disney movie and his biography, Glory Road as well as his famous decision to start five blacks against Kentucky University in the 1966 NCAA Championship game. The title, very fitting for the biography and movie, as Don Haskins led a life of glory: One of simplicity and truth.

Haskins was a man of respect, honor, and integrity as he represented and expected the same qualities in and from others that he held for himself. He did so without discrimination of gender, color, race, creed, nationality or anything else society attempts to divide itself with.

In a time when discrimination and segregation was as thick as the Texas heat he enjoyed, Haskins turned a small school in south Texas into an NCAA powerhouse through hard work, sacrifice, and what was then considered, controversial recruiting - recruiting blacks.

In a time when such an act was considered unthinkable, Haskins recruited all over the United States, and used his pipelines for many inner city talent to fill out his roster. In his biography, Haskins stated that was not trying to make a political or social statement, but was "just looking for the best basketball players."

Haskins did the same whether he coached on the NCAA level, or in his earlier days coaching High School Girls basketball.

He treated everyone equally.

And that was his most impressive accolade of them all.

Haskins, like Jackie Robinson, was a true pioneer in intergrating the sport of basketball through his coaching and mentorship. Often, his work goes unnoticed because of the success of many athletes beyond his time. Nonetheless, Haskins never thought so. In fact, Haskins never liked to talk about himself, his accolades, or his place in history. That's just the type of man he was, which makes him more revered (Biography is highly recommended).

Despite his humiltiy, Haskins not only helped pave the way for a better game today, but helped blacks during the sixties (and all that came with that time) when hope was all there was. Haskins, like Robinson, went through the fire, receiving hate mail and death threats because of his beliefs and qualities. Despite the rough roads, Haskins stayed the course and opened doors for blacks to athletics and education.

All of it because he believed that people were just that - people. Nothing more, nothing less.

He simply treated everyone equally.

And because of that, Haskins paved a glorious road for an integrated sport- a better sport-and a better nation.