There is so much emotion, thought, and recollect that emanates from that statement. For the first time in the history of this glorious nation, the highest office in the land is held by a man of color.

There isn't much that can be seen, written, read, or said that hasn't been already. It was a historic moment for people of color. The issue hits the heart with many people who are just generations away from segregation and Jim Crow laws, children who are constantly battling stereotypes and lasting racism, and those today who are trying to shake the gorilla, and move forward toward a better America - a better day. That all culminated on November 4th, 2008 - that better day.

Yours truly has experienced the awkward aura and almost disappointing look on an educator's face faking emotion and fabricating a positive vibe when a young ten year old child claimed he wanted to become President of the United States of America. It's a look seen too often by children who are often told that the sky is the limit, but there are certain things that you just might not be able to accomplish. All of us, every race, color creed, and nationality looked forward to that day when a young child can be told honestly, effectively, and whole heartedly, to quote President Obama, that "yes you can." That all culminated on November 4th, 2008 - that better day.

Although President Obama has yet to make any reform, and we are still reeling off his high created by the sense of hope and change, the mere elect of Barack Obama is evident of what has been said so many times since that better day, "America has come along way." An election that caused so many to come together from all forms of life to make such a historical event happen without hatred, bias, or bigotry, is a true testament of what America in the year 2008 - on that better day - is made of.

It is the substance the great Reverend Dr. Martin Luther King Jr. dreamed 45 years ago in front of the Lincoln Memorial. It is the mere fabric of the beauty that can happen when color is transparent, and character and brotherhood is held up as the standard that can defeat hate and bigotry. On November 4th, 2008, it almost felt like part of Dr. King's dream were a reality. Millions around the nation, of all ethnicity, race, religion and color coming together, in one strong bond. 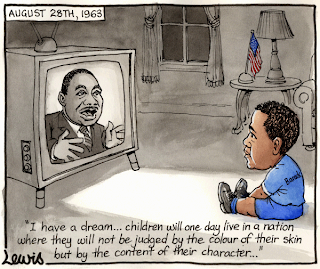 Who knows what the future holds? President Obama has many issues to tackle, many tasks to attend to, many conflicts to resolve, and many situations to change. There is no guarantee he will fail, nor is there a guarantee he will succeed. The next four years will give us those answers. However, on November 4th, 2008, President Obama's election gave us just a touch of Dr. King's dream. Character and brotherhood over color. Character and brotherhood over our foolish past. For one day, we were able to touch Dr. King's dream for a moment, and see the beauty of his vision. It was just a pinch and yet, remarkable. A day that neither, you, or I will ever forget. It was a better day.