No Excuse: The Fall of Manny Ramirez 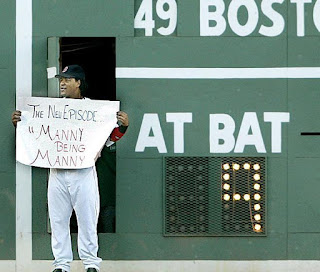 As disappointing as this is to the baseball world, it seems the steroid fallout is far from being over.

The baseball world has been recovering from the news of Alex Rodriguez's use of performance enhancing drugs, yet, the news of Ramirez's positive test opened those sore wounds of disappointment. Ramirez, who is the greatest right-handed hitter of this generation, had a cult-like following and a lovable reputation with fans, that created a fun atmosphere in a child's game.

However, now he forever will be known as...cheater. Even more so than others.

Ramirez is by far the biggest name to be caught under Major League Baseball's new drug testing policy. With all the news surrounding Ramirez's positive test, and the impact it has on baseball's image, credit needs to go to MLB for it's effective policy, and for making an example of one of it's biggest stars.

Despite the numerous allegations regarding BALCO, The Mitchell Report, and the remaining 103 players for the supposed "list", Manny Ramirez was caught. No allegations, reports, or suspicions about it. As much as we've heard the excuse of taking "unknown substances" in the past, Ramirez had more than enough examples to learn from and evaluate to make a sound and beneficial decision.

The culture is no more. The excuses may not have been completely accepted, but were at least feasible in such an experimentation-filled, lack of discipline era. It was somewhat understandable.

What excuse can Ramirez have?

Ramirez wants us to believe that this whole situation is a huge misunderstanding revolving around prescribed doses from a doctor. The fact is, he tested positive for hCG, a substance used for restarting the body's ability to produce testosterone after coming off a cycle of using steroids.

What excuse can Ramirez have?

We've all bought into "Manny being Manny" for so many years. If this is what Manny has been about, we've all been fools.