June 10, 2010
This is an article that was posted on ESPNnewyork.com discussing the managing futility of Isiah Thomas. With New York and the Knicks organization looking forward to opening the doors to a new era of hopefully winning and successful basketball beginning on June 24th for the NBA Draft, and of course later on with free agency on July 1st, the era of terrible management and bad basketball comes to a close.  Donnie Walsh spent the last two years untangling and undoing the situation which Thomas managed to get the franchise into. Now with light at the end of the tunnel, we forget (and we should) just how terrible Thomas was. In a very clever article written by Tom Haberstroh, the “Isiah Era” of Knicks basketball is put into an interesting perspective.


There's Wilt's 100-point game and Oscar's triple-double season in 1962. There's Russell's championship-ring collection that dresses every finger and another. And, of course, there's Jordan's 866 consecutive games scoring in double figures.

These are some of the NBA's most untouchable feats, but perhaps none of them measures up to Isiah Thomas' accomplishment while he ran the New York Knicks. No, it isn't the number of New Yorkers who renounced their identities as Knicks fans. This accomplishment is more cause than effect.

The feat? Isiah Thomas' fiscal irresponsibility became so extreme during his time as Knicks president from 2003-08 that he paid $120 million for a total of 82 games played.

To be fair, that nine-figure sum was given not to a single player, but to seven who played either partially for the Knicks or never at all. As a comparison, Michael Jordan received a record-breaking $33 million paycheck from the Chicago Bulls in 1996-97, a season in which he averaged 30 points a game and led the Chicago Bulls to a fifth championship in seven years.

The Isiah Seven? They averaged 10.6 points per game over the combined 82-game span, equaling a third of the production for three times the price of that Jordan season.

If the $120 million figure sounds preposterous, that's because it is. In all, Isiah Thomas effectively lit $50.6 million on fire by paying Jerome Williams, Maurice Taylor, Dan Dickau and Stephon Marbury for seasons in which they did not play for the Knicks. While it's true that the Knicks may have been better off without them, $50 million is expensive kindling. By comparison, the Oklahoma City Thunder leveraged a similar sum of money into a playoff appearance and a near-dethroning of the defending champion Lakers this postseason.

So how did this all happen? During Thomas' reign, Madison Square Garden slowly turned into a quarantined depository for the league's diseased payrolls. Despite the common perception that Thomas routinely signed marginal players to exorbitant contracts, none of the players on the $120 million list was actually inked to a contract by Thomas himself. Thomas rescued other league executives and excused them for their colossal overvaluations.

In the summer of 2003, the Bulls were desperate to pawn the Jerome Williams contract they had inherited from the Toronto Raptors, who had recklessly signed the glorified reserve to a seven-year, $41 million deal three summers earlier. Once Isiah came calling for Jamal Crawford, the Bulls found their safety net and successfully unloaded Williams' contract to the Knicks. After one underwhelming season in New York, the Knicks waived Williams but were still responsible for the remaining $21 million paid out over the next three seasons.

Williams wasn't the only salary dump absorbed by the Knicks. The Knicks freed the Rockets from paying the remaining two years and $18 million on Maurice Taylor's contract after Thomas traded for him during the 2004-05 season. Taylor received a cool $7.5 million for the 2006-07 season after getting as much playing time in a Knicks uniform as you did. Dan Dickau was a $3 million afterthought in the infamous Zach Randolph trade with the Blazers, and we all know the bitter ending of the Stephon Marbury contract.

But this list doesn't completely capture the scope of Thomas' fiscal follies. Notice the absence of Jerome James. Thomas signed James to a much-scrutinized five-year, $30 million deal after he tripled his regular-season per-game numbers in the 2004-05 playoffs. But the four games that he totaled in his final two seasons in a Knicks uniform would prove to be too many for our 82-game quota.

Sure, Thomas crippled the long-term flexibility of the franchise by absorbing enormous contracts that pushed the Knicks deep into the luxury tax, but it's easy to forget how his willingness to relinquish future draft picks stunted the franchise's development as well. 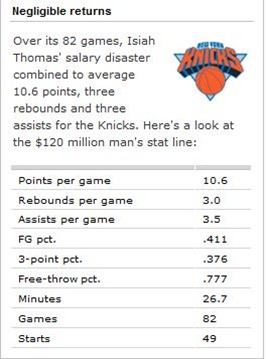 Consider that in the deal for Eddy Curry, Thomas gave up the rights to four future draft picks -- four picks that eventually turned into LaMarcus Aldridge, Joakim Noah, Kyrylo Fesenko and Jon Brockman. On top of that, the Utah Jazz will pick in the Knicks' ninth slot in this year's NBA draft thanks to Thomas' blockbuster trade for Stephon Marbury six years ago.

No one understands the ramifications of salary-cap abuse more than Larry Coon, the author of the indispensable NBA Salary Cap FAQ and an administrator at the University of California, Irvine. Professor Coon, as he's called by ESPN.com's Marc Stein, points out that the NBA's salary-cap structure compounded Thomas' poor decision-making by turning misguided deals into debilitating ones.

"It's not so much the money the franchise had to spend," Coon says. "More importantly, he tied up the team's cap room on overpaid, marginal players who consequently were difficult to move."

Andrew Zimbalist agrees. As a sports economist and a professor at Smith College, Zimbalist has written several acclaimed books that focus on the business of sports. Zimbalist contends that the NBA, with its "convoluted salary-cap rules," requires GMs to show stronger fiscal responsibility as opposed to impulsively throwing money at their problems.

"The NBA teams that have tried to do this since the 1998 lockout have failed utterly," Zimbalist says. "Thomas should have known this." Instead, Thomas became the poster boy for executive incompetence.
As Thomas' replacement, Donnie Walsh has primarily spent his time scrubbing away the mess left behind by Thomas, who's now head coach at Florida International.

"Walsh's job wasn't doing something," Coon says of the current president's body of work. "It was undoing what Thomas had done." With a phone as his scouring pad, Walsh has worked the lines to clean the books that were sullied by his predecessor. Yet two years later, Thomas' fingerprints remain.

As most Knicks fans know, the Jazz will occupy the Knicks' lottery seat in this year's draft. Furthermore, Walsh still must find a taker for Eddy Curry's $11.2 million contract, which expires next season, if the Knicks want to be serious bidders for LeBron James or Dwyane Wade this summer.

If anything, Isiah Thomas' tenure teaches us that a Hall of Fame basketball career shouldn't be considered a valid prerequisite for a GM job. Armed with a bachelor's and law degree from the University of North Carolina, Donnie Walsh represents a different kind of NBA executive, with a strong business background and zero playing experience in the league.

"For those who were not already convinced," Zimbalist says, "Thomas should have left no doubt that great players are not necessarily great GMs."