Us Vs. The World

“Do you care now?
For one month, soccer will become a canvas for America to illustrate it's sporting dominance in the world. To do that, they will have to overcome all odds and defeat the world in their game. For one month, soccer becomes our game. The World Cup can indeed become yet another "Miracle" story”
-Hockey vs. Soccer: Why Should We Care; Dome Pondering 6/7/06

Those were the words written by yours truly four years ago in preparation of the 2006 World Cup in Germany. During that time, USA soccer, despite being ranked 5th, was merely just another underdog in the World Cup, and was not heavily favored. In fact, the United States, like always, and probably forever, were hated and despised.


Fast forward four years later, and the same rules apply, except for one major difference. Yes, most Americans aren’t excited about soccer. Yes, the United States soccer team is still hated around the world. However, they are not an underdog. In fact, in the 2010 World Cup, the United States was expected to come out of group play – and they did.


Unlike the last World Cup, I decided to wait until now instead of commenting on projections and the probability of a U.S. run. The reason being that this year, anything less than the point in which they are today would be considered a failure. Nonetheless, here they are. Geared for knockout play against an impressive Ghana team.
With all of that said, the goal scored in the 91st minute against Algeria was one of the most exciting moments that I have ever witnessed in sports. It was something so pure, so true about what sports should be. Not about the contracts, the money, the marketing, or even the jockeying for free agents. It was about pride and rooting for a possible historic story in the making. And if you’ve followed U.S. soccer, you would know that it could not have been scripted any better than having Landon Donovan score the go-ahead, and eventual winning goal.
Now, there is no secret that the United States is hated around the world when it comes to soccer. The rest of the world loves the fact that the United States is not good in what is considered the world’s sport. We compete, and let’s face it, dominate almost every major sport. However, soccer remains this nation’s biggest Achilles heel. And the rest of the world has stopped at nothing to keep it this way.
In the post “Hockey vs. Soccer: Why Should We Care”, I asked the question, why should we care about U.S.A. soccer? Wayne Drehens had a great read in an article on espn.com a few years ago that I also quoted in that same post. He stated:

Try playing with chants of "Osama bin Laden! Osama bin Laden!" raining down, the Americans say. Try getting ready for kickoff with uniformed militia guarding the field holding ready-to-fire machine guns. Try scoring a goal with rocks, batteries and bottles flying toward you. And try falling asleep the night before a match while fans drive by your team hotel, honking horns, setting off cherry bombs and blasting music.
A recent Gatorade commercial highlighted the rocky road that brought the U.S. to Germany. In one clip, fans stomped on the stadium floor so hard that the ceiling tiles shook in the U.S. locker room. In another clip a fan held a massive sheet that read, "Yankees Go Home." And in another clip, a fan held a sheet that depicted a U.S. player as the devil.
The unwritten and unspoken motto is to expect the unexpected. Lost luggage. Fire alarms at 2 a.m. Bus drivers getting lost. And no running water at the stadium, making postgame showers nothing fancier than pouring a couple bottles of water down your back.

When you're an American, it doesn't matter," DaMarcus Beasley said. "They see that uniform, and then you're the enemy.

Forget the impact a World Cup win can have on main stream soccer in this nation.
Forget the fact that a man like Landon Donovan, who unlike other soccer stars in this nation has remained true to U.S. soccer through the tough times, and has captained this squad into this great opportunity.
No, it’s not about that. 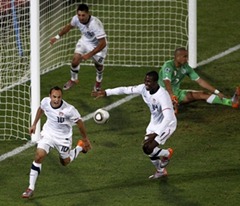