Changing the Focus of the Game 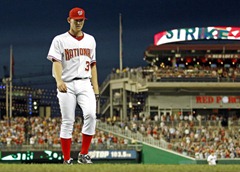 So after three start it seems like Stephen Strasburg is the real deal. Last year, yours truly selected Strastburg as one of the many pitchers in baseball that will likely have a huge impact on the game (Under 25 and Loaded: The Future Faces of Pitching). And at the time, despite not even being drafted yet, it seemed like a safe decision to go out on such a limb due to his dominance in collegiate baseball at San Diego State University. Many baseball diehards knew he would be good – but this good?

I admit, I never gave it a thought. But then again, does anyhow believe anyone can be that good?

Yet, after zipping through the minors like some sort of super ringer, that same “special” quality has sustained thus far after 19.1 innings of professional baseball. With blazing triple digit fastballs, wicked sliders, and deceptive changeups, Strasburg has managed to make many believe he is the “all 99 attribute” created player we all fantasize about when pushing the buttons on our video game consoles.

After those three starts, here are the numbers on Strasburg’s performances:

In one word – impressive. Very.

And while the sport of baseball has had it’s fair share of young phenoms and flame throwers come through the sport, the aura and vibe around Strasburg is one we haven’t seen before. The craze. The interest. The main stream attention. There is something about this kid that has transcended the game itself. Sellouts, national coverage, and the craze has caused Strasburg to become the games biggest draw.

And while a young kid with only three games under his belt being the face of baseball sounds a bit far fetched and likely premature, the general public is proving that is not the case with Strasburg.

In fact, with the  once in a lifetime stuff that Strasburg possesses, he should be. And while baseball does not market it’s individual players, moving forward, it might be beneficial for the evolution of the game if baseball began to do so.

Now purist of the game may shake their head in disgust after reading such a suggestion, but the fact of the matter is that  the game has already moved away from the “duck your head and hustle around the bases” mantra it once held as the holy grail of the sport. The game today is wrapped up in the ESPN era of highlight reels, making statements, and being recognized. From Jose Reyes dancing on first, Joba Chamberlain twisting and fist pumping, Francisco Rodriguez kissing the sky after a save, and almost every superstar slugger standing and strutting in style and admiration after launching one in to the stratosphere, the game has changed.

A bit excessive on most fronts? Yes.

But it is a change that is here to stay.

A change that is encouraged by our modern society  as we seek entertainment as well as a connection with the players that now play the game.

Yet, baseball attempts to maintain its ways.

The result? Many of baseball’s most talented players are going unnoticed.

While Strasburg is phenomenal as a pitcher, how many casual fans know about the game’s best position player in Albert Pujols? And why does it feel like he is barely even known?

Also, how big of an opportunity did baseball blink on with a talent like Ichiro Suzuki?

The marketing doesn't necessarily need to be as aggressive as the NBA’s plan where the league sometimes has a feeling of no one else matters other than players named Lebron, Wade, and Kobe. However, the mere branding and marketing of the games biggest names and best players could go a long way to begin reaching audiences that do not enjoy the great game of baseball.

Nonetheless, Bud Selig has done a great job of balancing the evolution of the game between adding modern amendments such as interleague play, the Wild Card playoff berth, and instant replay, all the while preserving its history. However, in this case, the old ways of marketing teams is just that – old.

The focus of the game is changing. And that is due to a variety of things which is another post for another day. 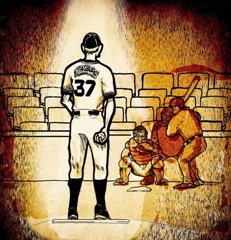 After a highly controversial steroid era, the game needs ambassadors and faces that exemplify the game in a great way. And the game has many players that can fit that role.

Stephen Strasburg seems to be one of those players. “Historical” is the word Tim Korkjian and many scouts have used.

Whether Major League Baseball and baseball purists like it or not, fans tune in to watch the Washington Nationals because of Stephen Strasburg. And while that may sound sacrilegious in baseball circles, it is where the game, and sports overall, is headed today.