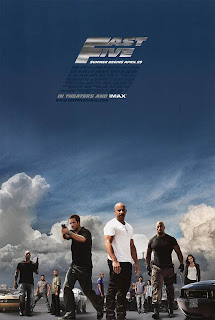 Dominic and the crew find themselves on the run again from a Brazilian mob and U.S. federal agents as they attempt to pull of one last job to secure their future freedom.

The fight scene between Dominic Toretto and Lou Hobbs in the warehouse.

The final scene at the end of the movie where there Hobbs received word that a job was pulled in Berlin, Germany by Letti, who was presumed dead. "Do you believe in ghosts?" is the statement leaving a cliffhanger for another installation of the series.

Tego Leo: Why you gotta be so negative, man?
Rico Santos: I'm not negative. I'm just positive you're gonna mess it up.

Fast Five is an interesting film to review. The Fast and The Furious series over the years have gained a specific following that is quite unique. From car lovers to women who just love the men in the series, no matter the quality of the actual film, once it has cars, speed, action, violence, and some fist pumping music thrown in, the fan base is satisfied. Fast Five seems to be of the similar formula.

The fifth installation boasts an array of talent that really adds to the film. Bringing together specific characters from each of the first four movies is a nice touch that gives it a nostalgic touch. It is a small concept that often goes unnoticed in many movie series, but somehow, they have managed to not only preserve the idea of continuity throughout the series, but one that gives an additional investment for fans. Add in the usual cool cars, racing scenes, and some dynamic special effects and camera views during the action, Fast Five is a very good film to look at.

On the other side, there is the lack of logic and development in the film. There are moments where you will question the action. How did they just steal four police cars? How did Dom Toretto manage to get an entire underground drag racing culture in Brazil to suddenly help him? How did the police chasing them not see the safe switch?

Maybe its nitpicking, but sometimes there are holes that make a viewer confused. Fortunately, the crash-style plot concept will mask those holes.

Also, there is something about the plot and the team of specialized individuals that is reminiscent of Italian Job. At any moment, it just feels like Toretto will eventual say, "we'll do it just like the Italian job".

Nonethless, the talent in the film shined, especially The Rock, who really added a new element in his role as Lou Hobbs.
Overall, Fast Five is a dynamic film that has so many things going on, good and bad, that it really doesn't matter. At the end of the film, it is entertaining in an enigmatic way.