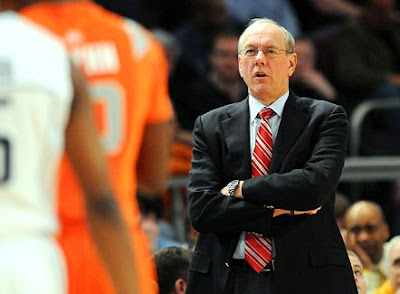 The recent scandal that has shocked Syracuse University,  the surrounding community, and its alumni and fans, has grown into a story that is down right disturbing. Fresh off the Penn State ordeal which saw the fall of a legendary coach, several horrifying testimonies, and a great concern in the crisis decision amongst our society, we are once again lambasted with the same characteristics of that scandal - a potential smear on the legacy of Basketball coach Jim Boeheim, unsettling evidence in a recorded phone conversation, and once again, a huge red flag in the constant disappearing decency amongst our society.

Looking at the Penn State case, I found it very difficult to grasp an understanding the way of life in State College, PA. I mentioned in a previous post that a caller to a local sports radio show claimed that on the mantle in every State College home was a picture of their family, Jesus Christ, and Joe Paterno. It helped me understand a bit more about the fascination with Paterno, but quite honestly, I never could quite wrap my mind around the undying support.

However, with the situation around Syracuse University, I feel a bit more involved with this story due to my life experience. I spent four years at college in Central New York in the Syracuse area. I have a wife, who is from Syracuse. And the kicker, I spent three years with a roommate, and eventual best man, who was born, raised, and downright bleeds orange. So with the immediate support that has come out for Coach Boeheim over the last couple of days, I can relate. I can understand it. I have witnessed it. I get it. I've lived it.

So far through this entire investigation, I've wholeheartedly believed that Coach Boeheim did not know of the scandal. Much to the self-defiance around such Syracuse-crazed individuals I'm surrounded by, Jim Boeheim is one of my favorite coaches in sports. He's honest, forward, and a winner. I guess the cat is out of the bag...

However, as the news, stories, and investigations continue to unfold, I stumbled across an article on foxsports.com written by Mark Kreigel. Now, in my honest opinion, Kriegel usually stretches really far in most of his articles to the point of laughter, but in his recent piece, it really forced me to examine a crucial aspect of the entire situation - did Boeheim really know? And am I using the same outside, non-partial judgment that I used assessing the Penn State issue?

As for the first question - I'm still not sure. I understand it seems weird and skeptical to claim to know someone for most of our lives, the way Boeheim has with Fine, and not know of or about such awful actions in their lives. Even if you are in charge of a huge basketball operation. However, it can be refuted that we all have demons. All of us. And there are variables each of us struggle with that our closest relater will never know of. It can happen.

As for the second question - absolutely not. Like my wife, my best man, and probably the entire city of Syracuse, I've been in an orange haze. And that was the answer that stopped my mind from simply spinning in place, and forced the wheels to get going.

It is quite clear that Bobby Fine, at least in the court of public opinion, especially after the taped conversation between Laura Fine and accuser Bobby Davis, is guilty of the alleged actions.

Pedophile. Scumbag. A piece of you-know-what. Lock him up and throw away the keys.

Unfortunately, legally, that can't be done.

Somehow, all of the evidence, allegations, filed reports, and effort given to the Syracuse Police Department when Bobby Davis initially came forward has disappeared, and the case and investigation was deemed closed after an "investigation".

Quite fitting, that the officer who closed the case played basketball for three years at Syracuse University.

And oh yeah, how about The Post Standard (A Syracuse Newspaper) and ESPN's ability (and nerve) to hold onto crucial evidence, even though incriminating, without reporting it to the police or campus officials?

Once again, no one taking action.

And with the latest rumors from Dead Spin (click here),  known as the TMZ of sports, yet very accurate in its reporting, the following story does not bode well for all parties involved.

Look, I understand the culture of collegiate sports. It's a protect the program at all costs mentality. And in this realm of sport, only seen in college athletics, coaches are man-made gods. And just like Paterno at Penn State in tightly knit State College PA, in Syracuse, NY, it's Orange, and it is Jim Boeheim.

With that said, with clear eyes and an unbiased opinion, getting back to that proverbial first question, did Boeheim really know?

I'm still not quite convinced he knew. But everyone else sure as heck did. And they made sure they protected him and the program.

And looking at this in the same lenses of the Penn State case, if we remove the city, the university, the tradition, the orange haze, and all of the celebrity that is Jim Boeheim and Syracuse basketball, what do we have?

A coach who was unaware that his assistant coach and friend,  has been molesting ball boys of the program for years. And the slight possibility that his friend's wife has had sexual relations with many of his players.

All under his watch.

I'm sure you would agree, but that coach, would be shown the door immediately.

And unfortunately, the way this case is unfolding with the Feds taking over, thus seems to be the fate of Jim Boeheim.

What do you think? All feedback welcomed.