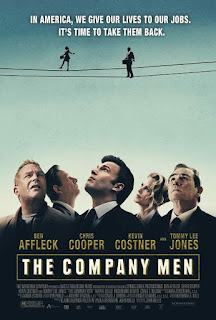 Three very different men deal with the ramifications and impact on their lives after they lose their jobs during corporate downsizing.

After realizing landing a job on the open market was much tougher than he anticipated along with the need for income, Bobby swallows his pride and takes his brother-in-law's carpenter job offer.

"You know the worst part? The world didn't stop. The newspaper still came every morning, the automatic sprinklers went off at six. Jerry next door still washed his car every Sunday. My life ended and nobody noticed."

The Company Men is a good, wholesome, realistic film. It is the perfect for many who have struggled during the hard economic times, especially those who have lost their jobs due to "corporate downsizing". The film's focus on three men, all whom have different situations and are in different point in their lives when they were let go add to the dynamic plot. It is highly relatable, and often, a good dose of truth as well.

Ben Affleck, who has recently churned out quite a bit of awesome roles over the past few years shines brightly as Bobby Walker, a once thirty seven year old brash professional who made six-figures, provided nice things, but barely had his family. As the movie goes on, and he is humbled and learns not to attach his work with his life, Bobby changes, and the slow change perfected by Affleck's portrayal.

Overall, there aren't any glaring negatives to the Company Men. It isn't perfect, and I'm sure it might be a bit too personal for some depending on their personal experience, and ability to handle it, but The Company Men is a great film that is as solid as they come. Great acting. Great writing. great plot. Great hook. Great story.A can't miss.

Definitely worth the 104 minute run time.