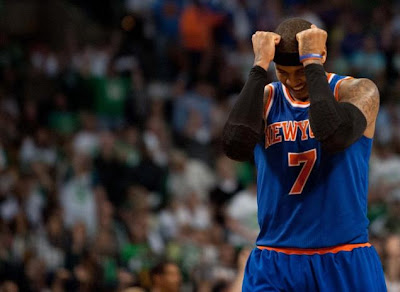 I'll admit, there was a tremendous amount of anxiety felt watching game six tonight between my New York Knicks and the Boston Celtics. Of course, throughout the game, the traumatic idea of the Celtics making history sat in the background of my conscience. And with each bucket that chipped away at a one time twenty-six point fourth quarter lead, that knot in my stomach grew tighter and larger. The thoughts crept into my head about game seven back at Madison Square Garden. Even worse, if we lost this game, how can we expect to win game seven?!

But rest assured, those thoughts were put to rest. For the first time since I was fifteen, my boys in orange and blue have won a playoff series. And as excited as I am to move on to the second round, I feel a combination of happiness, relief, and respect for Carmelo Anthony.


Anthony, who has had his share of critics since coming to New York, had his basketball career on the line against the Celtics. It wasn't talked about much, but we all knew if Carmelo Anthony somehow fell victim to becoming the star on the first team to lose a playoff series in the NBA after being up 3-0, it would follow him for the rest of his career. With very little chance of ever shaking it. Ever.

Yet, while I am excited about the advancement, it is the play of Carmelo Anthony down the stretch in Boston that really has me excited. For all of the doubters he has, including here in this city, Anthony embraced the moment when the Knicks needed him most and delivered in a big way. It was in a way we've never seen him perform in the playoffs before. After struggling for the third game in a row, Anthony played inspired, determined, and urgent basketball in the final three minutes to hold the lead. In my opinion, it was his defining moment as a New York Knickerbocker.

I'll go one further, it might have been the defining moment in his career.

For all of the negative things said about Melo:

...it seemed he crossed them all of for three minutes.

In those three minutes, Anthony displayed sheer guts. He played like a man faced with the greatest adversity he's ever faced in his life. And for a few moments, he was able to silence those critics.

For the first time in who knows how long, it wasn't the gaudy offensive numbers that impressed us from Anthony, but it was the performance in spite of the normal offensive numbers we expect. It was a game in which he struggled, yet, still managed to come through when the team needed him most. When he needed to validate that "superstar" stamp given to him by all of us. The same stamp, that has been slipping away now that he is on the big stage of New York.

There was the first moment, which was probably the biggest - that tough fade-away eight-foot jumper over Brandon Bass to stop the Celtics run. Then there was the coldblooded trigger to hit the dagger three at the top of the key. And finally, that signature swipe block of his on Paul Pierce.

I'm not his biggest fan, but I do recognize real. I do understand talent. And most importantly, I do love grit and heart in moments like that.

And what Carmelo accomplished in those three minutes was one of the gutsiest and most desperate, yet clutch performances, I have ever seen from a New York Knick. Patrick Ewing included.

And because of that, my team, team orange and blue - the New York Knicks - are on their way to the second round for the first time in thirteen years.

How can I possibly find a way to hate Carmelo for that?