"May Day" (And Near Future) Lacks Big Punch 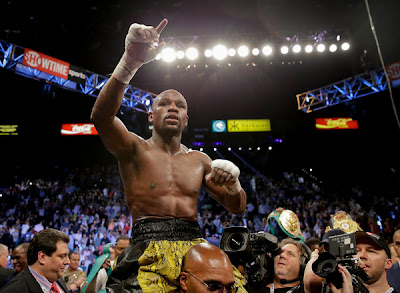 "How about that Mayweather and Guerrero fight?" - Said No One

After all of the hype around "May Day", the tagline used for the Mayweather/Guerrero fight, it seems like the fight arrived, occurred, and to some of us, like it never happened. There was nothing of significance or substance to take away from this past Saturday night's fight. With the same old script of Mayweather dominating, "May Day" was pretty much "Blah Day." Mayweather picked apart Guerrero (with an injured hand), and pretty much dodged every punch Guerrero could muster to swing at him.

You just have to feel bad for those who put down sixty bucks to see that fight. Either they were poor souls jonesing for something to happen in boxing, or simply put, suckers. Either way, Mayweather will earn another win once the buyrates are announced.

Going into the fight, I never heard of Guerrero, but I had very little fate that he would be able to defeat Mayweather. I, like everyone else, was simply hoping for a a good fight. Something worth my time. And deep down, something that could reignite boxing to the way it was when I was a kid.

Now I won't go into a rant on the downfall of boxing (It'll take too long) or what Boxing needs to do to update and correct the sport (I've done that already), but if there was ever a fight recently that depicted the sad state of boxing, it was indeed "May Day".

It was a fight that saw one of the greatest fighters of this generation step in the ring with yet another inferior opponent and beating him convincingly in the new definition of un-entertainment. A boring fight. No drama. No style. No story. No suspense. In fact, the fight resembled more of a one-sided sparring session.

It was a fight that had all juice, and no substance. Someone might has well had gone in the ring afterwards and stated, "nothing to see here folks, keep moving!" Even another Larry Merchant/Mayweather in-ring interview would have been entertaining.

It was a fight that really didn't leave you looking toward any future fights. Most ended the night with the feeling of, "sooooooooo, what's next?"

It was a fight that saw one participant earn $32M and the other $3M. The gap in earnings mirrored the type of fight it turned out to be.

It was a fight that saw so many title belts, it made you wonder if championships mean anything anymore (RING Magazine Championship? Really!?).

It was a fight that has been glossed over by most sports and news outlets. NBA and NHL Playoffs, anyone?!

Boxing used to have spectacles. There were must see fights, lots of debate of who was the best, thoughts of dream match-ups, and many arguments over comparisons.

Now we're getting "May Day", an event that seemed to be thrown together to earn money for those involved, rather for the overall health of the sport.

I don't blame Guerrero, and honestly, I don't blame Mayweather, who is boxing's last big draw. I truly blame everyone involved with boxing over the last two decades who reaped all the benefits without setting up the sport for the next generation.

We were withheld from Manny Pacquiao and Mayweather to the point where it doesn't mean anything, and unfortunately, never will. And to be quite honest, the heavyweight division is the epitome of "if a tree falls in the woods and no one hears, does it really fall?"

Boxing is very outdated, and is well behind the entertainment curve when it comes to the battle for our attention. We'll still tune in because the intrigue of Mayweather's first loss is interesting enough (which is why you can't argue against his $32M purse), but as of right now, there is very little going on in the world of Boxing.

And if fights with Mayweather are nearing the point of being disappointing and not worth the money, what is to be expected when the greatest fighter of this generation decides to call it a career?