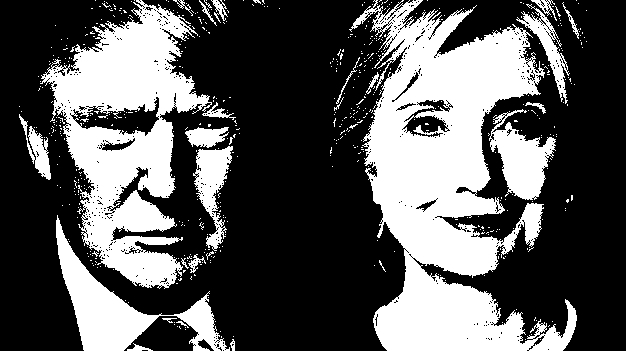 Well that surely was interesting. Yes, it was highly anticipated, but not for what we expect a Presidential debate to be - to provide voters and the public with an opportunity to gauge and measure the policies, thoughts, prospective actions, and an overwhelming feeling for the empathy of each candidate.

And quite honestly, as a debate nerd, I very much dislike the cynicism, the cheap hype tactics, and the overwhelming emphasis on "entertainment" this debate has surrounding it. But then again, this presidential race has been nothing but hyperbole, cynicism, and all sorts of nonsense. So yeah, it was expected, and it was surely, well, interesting.

With that said, last night, we got ourselves the first of four anticipated debates to help us choose who will have the position of leader of the free world. Here are some quick thoughts on last night's first presidential debate:


- Lester Holt had an extremely difficult job in this one. The format didn't do him any favors as moderator (more on than in a bit) as it is extremely difficult to control two fiery candidates, including the uncontrollable Trump. Holt did what he could, and overall, I thought he did a decent job. Though, I wish he was able to create more debate - imagine that? - on several topics.

- The format sucks. I'm being honest. As I continued to follow the development of these debates coming together over the summer, I very much disliked the segmented format with rotating two-minute opportunities. It's an awful format for flow, for true debate, and overall, for what we need to get out of these encounters. But you know, ratings, politics, and all of that tops everything. Whatevs.

- Interesting decision by both candidates on their appearance. Anyone notice the power red worn by Clinton? How about Trump rocking the cool blue tie? I'm usually not big on clothing as being the most expressive non-verbal communication, but this one was an obvious visual. It's even more interesting when you take into consideration party colors.

- Speaking of parties, when do we get Governor Gary Johnson on the stage? I'm just saying...

- Everything about this debate heading into it felt like a weird boxing/mma fight. Everyone knows Trump throws his haymakers. The deciding factor would be if Clinton loses her composure to engage in Trump's unorthodox style of communication, which is what has gotten him this far.

- For Clinton, she went heavy on the pathos right out of the gate with the story on her grandchild's birthday, her father's work history, and touching on understanding the middle class. In my opinion, this is the ground where this election will be won and lost. Who picks up those vital votes among the middle class, especially the minority and gay communities, will be sitting in the White House come January 2017.

- Following up on the previous thought, someone needs to tell Mrs. Clinton that no one cares to visit her website for fact checking. In fact, no one wants to hear about the schilling of your book, available now for purchase, of course.

And ditto for Trump with these "friends" and "endorsements" he kept sourcing all night.

I often try to place myself in the mindset of an individual living paycheck to paycheck and having to listen to candidates discuss "small" $14 million loans as well as the pushing of their publications to reveal plans for running the country. Can you just imagine?

- For all of his unprepared wackiness and chaos, there is something to be said about the nuance and intriguing rhetoric Trump displays and evokes when talking about trade regulations and taxation. Are the arguments articulate? No. Not even close. Are they rough? Yes. But what they are is highly, highly intriguing. Trump's insight is like listening to a criminal offer insight to authorities on how to prevent such actions from happening.

He brought up some strong points about his ability to take advantage of business loop holes, especially insight on the benefits of moving companies out of the country. Trump was very strong in this area, and came out of the gate in an effective manner - albeit, in his way.

- Though, admitting you haven't paid Federal taxes for several years is head scratching. I'm not sure how that helps your bid for President. Yet, somewhere in America, Colin Kaepernick is receiving death threats for being un-America because he takes a knee. Crazy. Just bloggin. Just my opinion, sorry.

- As a person of color in America, I can tell you that I'm living in hell. Obviously, I'm joking, but I continue to laugh at Mr. Trump's comment from last night, along with the the lack of understanding and poor discussion by both Presidential candidates on social issues.

Trump's continued reference to Chicago as if it's the sole representation and example of black and latino neighborhoods across the country instead of the insane anomaly that it is -  once again, mind blowing. There is more that goes into what makes up the issue happening in South Chicago than just blacks killing blacks, the suffering of black America, and the strained relationship between police and the community. Chicago is a classic example of systematic-racism that brewed red-lining and others institutionalized concepts that stem what we currently see. But you know, Chicago! Look at Chicago!

Clinton seemed to touch base on this a bit, and I applaud her for it. But it felt like both candidates were more interested in slinging claims of racism at each other or pointing the finger on "letting down communities" rather than addressing serious concerns currently facing our country.

- In Trump's mind, he's so often misunderstood. It's amazing how many quotes he's reneged on or has flat out claimed to be a fabrication.

- Did anyone else hear the loud explosion that was Sean Hannity's ego after being mentioned in a Presidential debate? I can only imagine what his show was like last night...ugh.

- After some questionable responses and a clear lack of strategy, Trump's continued wild verbal swinging landed a heavy blow with his retort on Clinton's lacking role as Secretary of the State and how ISIS rose to power under her reign. It was one of those moments in this awkward debate when the boxer being picked apart by the savvy fighter the entire fight brings the crowd to their feet as he knocks his opponent against the ropes. It really was well timed and well delivered.

- All in all, this was a disaster. This debate had it's moments, but the format hurts the flow, and the interruptions of both disrupts the ability for clear and concise critical thinking from the audience and viewers - myself included. It becomes easy to lose sight of the facts and the ability to clearly internalize the information being disseminated. Instead, you get caught up in the bravado, the rudeness, the interruptions, and the childish debate technique of talking the loudest and talking last to "win".

Forget the debate, I have to wrap my mind around the fact that these are our choices for President of the United States. May the Lord helps us.

The upcoming formats are sure to provide similar results, but I am hopeful. I very much anticipate the town-hall format which is what is needed for these two candidates. But let's hope for the best in debate #2, after all, the future of our country depends on it.