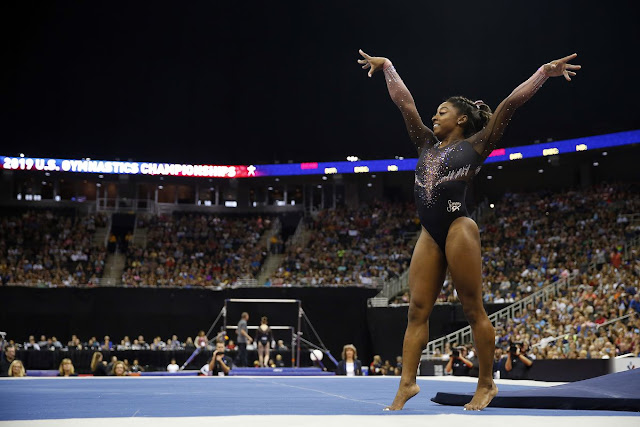 1. Green Polo Guy - The video of "green polo guy", the man who hilariously responded to a few Trump supporters protesting in Tucson City was everything this week. It truly is the way I at times want to react to some of the happenings we see in politics today.

2. Simone Biles - This blog's reigning athlete of the year, Simone Biles once again continues to dominate as she nabs her 6th U.S. Title win, and did so with a triple-double maneuver, the ONLY female to ever pull off the stunt.

3. Beto O'Rourke - I knew NOTHING about O'Rourke. But following his authentic reaction to the El Paso and Dayton (not Toledo) mass shootings that included calling the President out for his racist and dividng narrative, I also got to know the Texas politician a bit more through some interviews and podcasts. O'Rourke is a good dude - unfortunately, he has no shot at winning the Presidency. That's politics.

1. Mass Shooting Response - Nothing was more disappointing this week that the overall response to the masse shootings the country experienced last weekend. From the President's lackluster response, to Tucker Carlson calling white supremacy a hoax (eye roll), to Sean Hannity wanting to place guns and police officers in every right angle constructed, and Dems looking to make it a campaign advantage rather than a chance to bring forth some reasoning - it all just reminded me of why we've gotten no where in terms of gun control/reform, background checks, or flat out, being human.

2. NCAA - The NCAA wants agents to have a bachelor degree in order to represent student-athletes, huh? It's amazing the lengths to which the NCAA will go to control the worth of student-athletes to it's business model (keeping it at zero), while continuing to be hypocritical in it's policy making.

BTW - It is incredible what a guy like Rich Paul has done.

3. Jeff Epstein Death - It's so unfortunate that his victims will never get justice or closure. Or you know, the many other wealthy men tied to this awful pot shit that included raping girls and being a part of sex trafficking, won' ever get brought to justice. And yes, it's also VERY dubious that Epstein suddenly died.