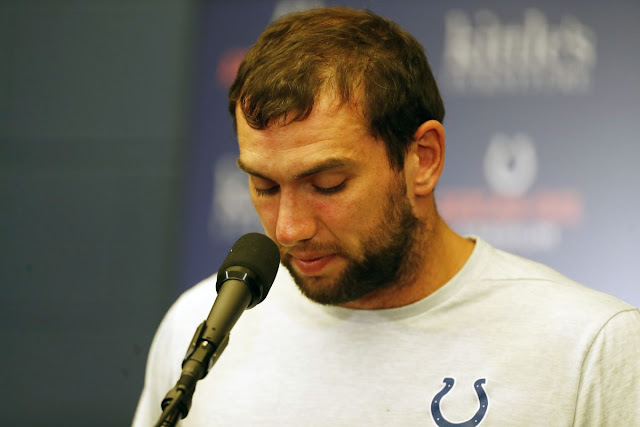 1. Andrew Luck - I was going to shame the crowd in Indy for booing Luck after walking off the field, but I'm going with a positive route here. Much props to Luck who did was best for HIM. Mental health and happiness is super important, and it is evident that many only cared about Luck for his athletic abilities. Good for him in doing what is best for him.

2. Jogging Man Good Samaritan - Not only is the story of a jogging man giving a homeless man his shoes a tremendous one, but now, that homeless man has a job offer. Lesson learned: a simple act of kindness can be life changing to another person.

3. Louisiana LLWS Team - I barely caught any of the Little League World Series this year, but from the highlights, it looked like yet another great tournament. And of course, much props to the team from River Ridge, New Orleans who won it all!

1. Florida Stand Your Ground Law - The controversial law made it's way back into the news after a white man killed a black man over a parking spot. Shockingly a jury convicted the shooter, but regardless, what is the point of this law? SMH.

3. Player's Weekend Uniforms - It's still a great idea, but please MLB, don't ever bring back these uniforms. The black ones were cool, but what the heck was the deal with the white ones? No contrast? White helmets?!!! And of course, the lame idea that the pitcher's had to wear black hats. The whole weekend, unfortunately, was taken away from the individuality, and was all about these bad uniforms.