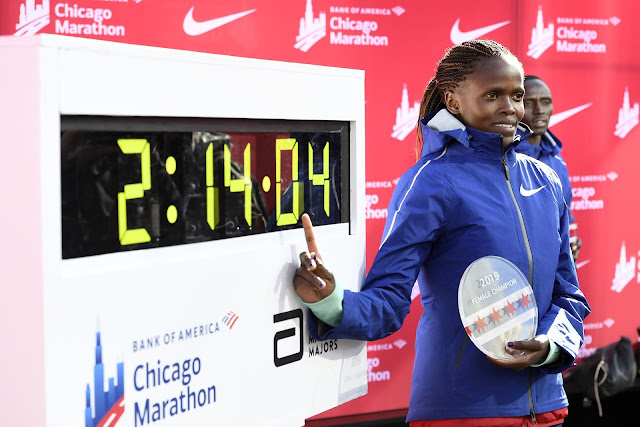 1. Marathon Under 2 Hours - Eluid Kipchoge stunned the world this week with a sub-two hour marathon. While some of question the "legitimacy" of the accomplishment within the running world, the feat is still rather amazing. A 4:34 min/mile for 26 miles is rather ridiculous to wrap the mind around. Congrats to Kipchoge on probably one of the greatest athletic accomplishments in our lifetime.

2. Black Girls Rock - Black women athletes ruled the weekend. Simone Biles solidified herself as the greatest gymnast ever (as if there was any doubt) by earning the most gold medals ever. Coco Gauff won her first Tennis Title (becoming the youngest champion - ever). And, Brigid Kosgei shattered a world record at the Chicago Marathon with a time of 2 hours, 14 minutes, and 4 seconds. Such impressive stuff.

3. Tyler Perry Studios (and Shelter?) - If you, like me, saw the images and videos from Ava DuVernay's instagram of Tyler Perry's new studios, you were also in awe. The massive 330-acre lot is a testament to success, and is extremely powerful (and ironic) in that it's built upon an old slavery. However, now Perry plans to use part of the old plantation to develop a shelter for trafficked victims, homeless women, and youth within the LGBT community. Just amazing.

1. Atatiana Jefferson Death - There are no words for this. Even when called upon to help, somehow, our police ends up taking the life of people of color. Watch this story closely.

2. Laquan McDonald Investigation - Hundreds of documents were released this week showing that sixteen Chicago PD officers participated in an attempted cover-up after Laquan McDonald's death. While the murdered was convicted and sentenced to six years in prison (eye roll at the verdict), the idea that THIS is how precincts operate in the name of "justice" is abhorrent and sad. Then again, this is not a surprise to anyone that has been paying attention.

3. NBA - The NBA disgraced itself this week. In the face of the spotlight, it showed nothing but cowardice in the China/Hong-Kong/Darryl Morley situation. I get it - China is a significant chunk of your business. However, after encouraging free speech in your league on social values, you decide to not only adopt China's values in silencing your players, you coward your way through the entire ordeal, including the preseason trip to China. A HUGE L this week for the NBA.