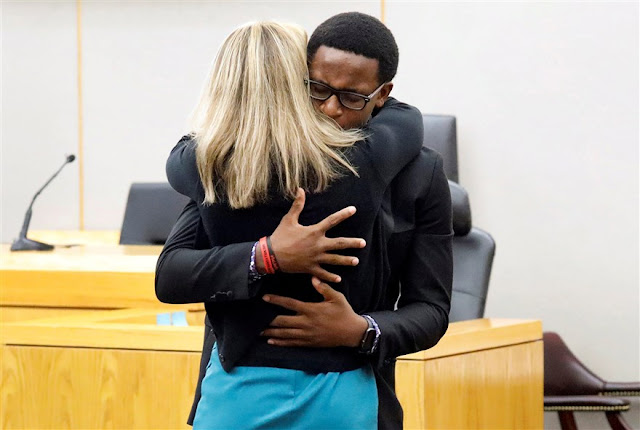 1. Forgiveness of Murder - Look, I know this was controversial. I read so many opinion pieces and tweets from many on what happened in a Dallas court room. The optics, the compassion, and of course, the proverbial "letting off the hook". For me, I will say this - forgiveness often does more for the forgiver than the forgivee. And justice - especially of the social kind - is not directly tied or weakened through forgiveness. In many ways, it emboldens it.

Honestly, it takes a really frickin' strong person to offer forgiveness to the murderer of one's brother. I know I couldn't do it. More props to that young man.

2. Pay to Play Bill - I work in College Athletics, and I'm a firm believer in the DIII model of amateur sports. Everything about the NCAA's operation, especially on the DI level for basketball and football is corrupt, greedy, and takes advantage of kids. Good for California Governor Gavin Newsome, who may just get the ball rolling in a direction in needs to go.

3. Gerrit Cole - My goodness. I'll admit it - I'm scared of the Astros. I've been saying it since they've acquired Greinke. Cole's performance was utterly ridiculous. He's going to make some serious bucks this winter.

1. Key Witness Murdered - Sooooo, just when one verdict works out for people of color vs. the police in this country, what we see is the now mysterious murder of the key witness in the trial, Joshua Brown. Not a coincedence in any way, shape, or form. Oh, and by the way, how Amber Guyger received ten years for this murder is also mind boggling.

2. Johnson & Johnson Settlement - If you check out this story, what you'll see and read is the mega company paying roughly $20M to avoid trial regarding their role in the Opioid crisis in Ohio. The settlement also acknowledges that they are not admitting to any responsibility in the matter. I'm giving the down because the entire Opioid crisis just seems so unattended to - unlike how this nation vilified many during the 80's and the crack cocaine epidemic. Imagine if the two were treated equally?

3. Sports Illustrated Layoffs - Gone are the days now when SI meant something in the world of sports. It's unfortunate that such a brand could not survive, adapt, and move forward in the current climate of sports communication.

1. Kiss From Dad - It's very much because I am a dad now, but everything about Juan Soto's dad tackling him and kissing him following his Wild Card game-winning hit, was absolutely awesome.