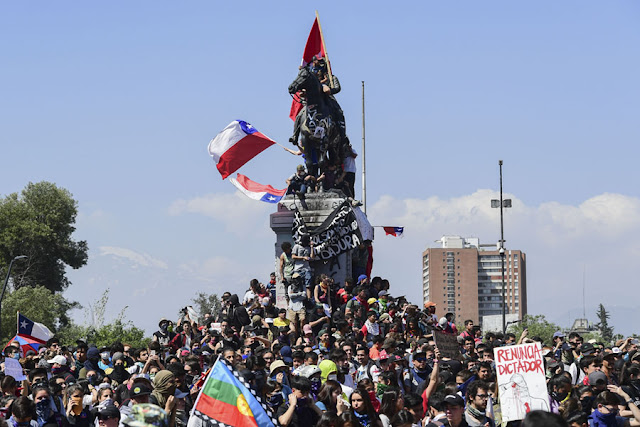 1. Meghan Markle - The former "Rachel Zane" of Suits fandom gets the nod here at the top spot for her extremely transparent interview regarding her mental health since marrying into the Royal family. Her response of "Not OK" was honest, and in many ways refreshing in regards to the toll the media, negativity, and the struggle that overwhelming fame can bring upon an individual. Kudos to Markle, and here is to hoping it gets better for her.

2. Chilean Protests - Protests for oppressive governments are happening all over the world. The Chilean protests this past week have been impressive and an eye-opener on what can happen when a government does not work for the people it should serve.

3. NBA Returns - As baseball comes to a close (so sad), it's refreshing to see the NBA return this week. Once college basketball returns, I think I'll be okay until pitchers and catchers. That is, until the Knicks drive me crazy.

1. California Wildfires - I got my dose of how serious these wildfires are in spending the last few days in Northern California. In fact, there was a serious worry that I wouldn't make it out due to the planned power outage. The scenes and photos are mesmerizing and powerful in how these wildfires affect and threaten the lives of those on the West Coast, but being there of course, gives you a real urgency of how threatening these fires are. I'll be thinking of the West Coast, especially those in the line of the fires, during this time.

2. Betsy DeVos - While I should place this in the "UP" section for the judge who held DeVos in contempt this week, I wanted to highlight the continued disaster DeVos is as Secretary of Education. In her latest example of why she should not be in the position she holds (Thanks, Prez), DeVos continues to push for students defrauded by for-profit schools to pay back their loans. And yes, in case you forget, DeVos has strong ties to for-profit education. Go figure.

3. Aggressive Cops - The video of cops pulling out guns on a subway platform right here in Brooklyn to arrest a young black man for fare beating is so troubling. For starters, it happened not too far from where I reside. Second, they pulled guns on a crowded train, causing hysteria. And finally, all of that for someone who cheated the MTA of $2.75?!!! Seriously?

1. "Lock Him Up" Chants - The President attended game 5 of the World Series and was met with loud booing and "lock him up chants". While his supporters and base practice these things, it's such a shame that the Presidency has become such a lightning rod where such disrespect now follows it. But again, that's where we've gone the last four years. It was unfortunate to see, but, that's just the current political climate we live in.

Kanye West Album - Umm, soooooo yeah, what was that?