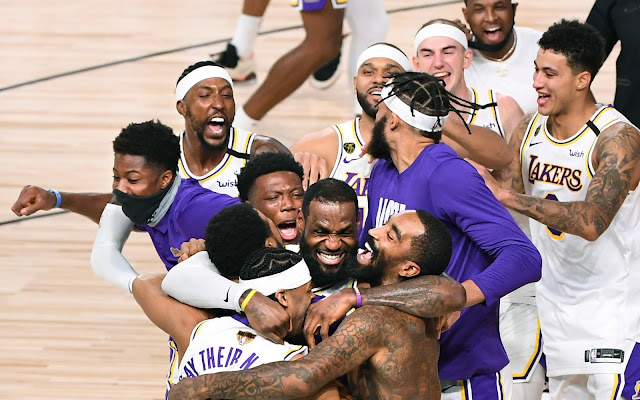 1. Nobel Prize Winners - While 2020 has dished some sobering thoughts - or altering feelings - on Americana, it is nice to get the news that two Americans were awarded the Nobel Prize in economics to Paul Milgrom and Robert B. Wilson from Standford University. Their work has re-thought and re-imagined how auctions work.

2. Los Angeles Lakers & Seattle Storm - Congrats to the Lakers and Storm who wrapped up the year-long basketball season with championships. Even more so to LeBron James and Sue Bird who each earned their fourth championship at the age of 35 years old - remarkable.

2a. No COVID Cases - I've mentioned it several times, but the work of the NBA and NHL should very well be commended for created "bubbles" and environments where they finished their seasons with NO positive COVID cases. They pulled off the impossible, and yes, produced the best on-tv product in sports since the pandemic began.

3. VP Presidential Debate - Well, it wasn't a disaster. And as we now learned, it pretty much wrapped up the 2020 election debate season. Regardless, we'll be throwing it into the "Up" for actually providing some sort of return to respectability.

1. Domestic Terrorism - The story coming out Michigan about kidnapping Governors and angry white-mob militias is absolutely crazy. For years groups and acts like this (see: mass shootings) have gone undeclared for what it is - terrorism. That's always been reserved for brown people. Regardless, the entire plot to kidnap the Governor of Michigan is a next-level-sort-of low we have sunk to.

2. Economic Stimulus Bill - People are hurting. Like, seriously hurting. The idea that our elected officials can't get this done, and that our President is holding the situation as a ransom for re-election is so entirely disheartening.

3. Voting Suppression Efforts - Why are we always focused on ways to remove ballots, voting ability, and efforts? Why has no one - including our elected officials - fought to improve the ability to vote?

1. Coronavirus Second Wave - Here in NYC - especially my very own neighborhood in Brooklyn, the virus is once again on the rise. I'm not sure if this is the all-so-talked about-second wave, but if it is, I pray that the projections aren't what we experienced in March, April, and May.