A Different Year It Is Not 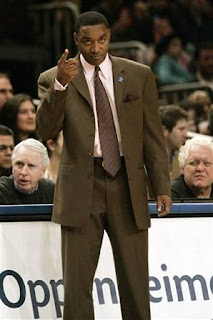 
That is how much money Isiah Thomas will cost Madison Square Garden as they pay for his indiscretions and poor judgment. Only, he didn't make these mistakes regarding the New York Knicks.

Isiah Thomas who has been scrutinized for all but his first few days as President of the New York Knicks, is once again under the spotlight. If criticism for his decisions regarding the Knicks weren't enough, Thomas has now added a $11.6M tab to the Garden's bill for sexual harassment.

As a die-hard New York Knicks fan, holding Thomas liable for the Knicks financial woes regarding the NBA salary cap is absurd. Thomas replaced an overpaid, aging roster with an exciting, promising (and overpaid) roster. Last year was his definitive year. A year of do or die. Although before injuries plagued the team from contending for a playoff spot, he proved that he had put together something worthy of his contract extension from James Dolan.

However, this year was supposed to be different. This year was supposed to be a year of stability. A year of focus. A year of finally getting serious about on-court issues rather than those that happen outside the Garden walls. Instead, we get the same old story. Like a ritual now - a season beginning with controversy placing the franchise and the "World's Most Famous arena" in a marred spotlight.