The Fear of No Fear

I was once asked this question about four years ago. As always, when asked a question of such personal magnitude, I wanted to take a moment to select a proper answer that truly captures and accentuates my absolute greatest fear. So, I brainstormed for several seconds, going over the many things that lock up my nerves and paralyze my mental ability. After honestly reviewing it in my mind twice, I came up with the answer of...

It was the most logical answer for my feelings, as prior to 2004, the thought of the Red Sox winning was truly frightening. It was the fear of every Yankee fan. Imagining what it would feel like, the annoyance of Red Sox fans, the feeling of defeat for New Yorkers, and most of all, the end of our greatest edge over the Red Sox- a psychological advantage. However, the Red Sox are cursed, right? That could never happen our my lifetime. No worries. 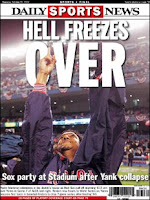 A year that no Yankee fan likes to mention. A year which saw a catastrophic collapse, a remarkable story, and the rise of "Red Sox Nation." A year that has been thrown out of every Yankee fan's history book like four day old leftovers. Along with it went the belief in curses and old Babe Ruth folklore.

Yes, 2004 felt like the world was upside down. Something so strange that it could not be explained, because in some fashion, it could not be comprehended. A feeling that can only be explained as eerie, making many believers in the term, "twilight zone."However, shortly after, everything seemed to be well on its way to returning to familiar ground. Red Sox swept out of playoffs in 2005. Miss Playoffs in 2006. Yankees once again gaining advantage in the rivalry, and looking as stellar as ever on paper (Hence, only on paper).

Yes, things seemed to be slowly returning to normal. It would take years to rebuild it, but it was well on its way until...

Another Red Sox World Series Championship. What was once a fear, has become a nightmare. No longer are we afraid of what can happen, but now, what will happen. The Red Sox have pulled off another spectacular October with a team that looks poised to make a run next year as well. This time around, the feeling isn't as weird, because sadly, every Yankee fan has been in this position before. Now, its two championships in the last four years. It has become a little familiar. Our fear is now gone. We have become desensitized. With the Red Sox on top of the world again, our fear now is that the fear is no longer there.