Rationally, He is My Guy 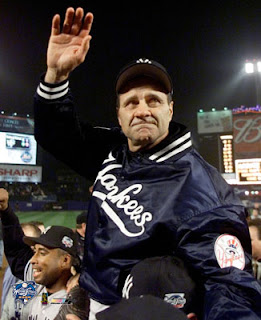 It seems everyone has an opinion lately on the future of the Yanks and what direction they head for 2008 season. Torre? Pettite? Posada? Rivera? Abreu? And oh yeah, Alex Rodriguez? Everyone has their opinions on who should stay and who needs to go. A mere three days after what has become the quietest 24-hour mourning period in New York City in the past seven years, the Yanks face a crucial and probably the most important off-season in the franchise's last twenty years.
It is not a secret (Thanks to non-stop ESPN coverage) that Joe Torre is the focus point of this off-season so far. Athletes like stability, and for the Posadas, Riveras, and Pettites of the world, Torre's return will play a huge part in their return. The Yankee Brass know this. Over the last twelve years, Torre has been immortalized in this city. Which is why it is smart for them to take a few days to be rational and separate emotion from logic. After all, in what other sport would a coach or manager with Torre's credibility and championship pedigree be removed from making the calls? Can you imagine Bill Belichick being fired by the Patriots after failing to win the Super Bowl?

Nonetheless, time does not wait for anyone, and it isn't waiting for the same men that awaits Torre's fate. The Yankees have new blood rising, and it cannot, and should not be ignored. However, as smooth as he's handled the New York press throughout his tenure, Torre has shown immaculate ability to nurture the young ones while keeping the high-priced millionaires in check. His players respect him. Former players respect him. This city respects him. The league respects him. Even Terry Francona and Red Sox fans respect him.

With that said, as far as Joe Torre as New York Yankees Manager is concerned - He is my guy.

If another decision is reached on "Mr. Torre", "Clueless Joe" did quite a job over the past twelve years.