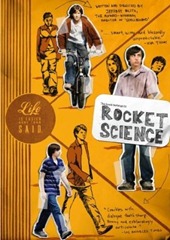 Hal, a stuttering high school freshman joins his high school debate team after his world changes when his parents separate. After being mentored and falling in love, Hal’s life changes again, and he's left wondering about life and life, and whether it is as hard as rocket science.

After stealing Ginny’s debate trophy with Heston as his partner then getting caught by his mom’s boyfriend, Hal takes off on his bike to Ginny’s house. On his way, Heston, his mom’s boyfriend’s son rode up behind him and states, “my dad said I was a complete idiot for not realizing you won an award today. Please accept my belated congratulations”.

Rocket Science is an odd and strange film. The film from title to credits has a weird, strange, quirky feel that is goofy, yet very real. The characters are weird, however, are ones that the viewer can relate to due to knowing someone similar. Especially the character of “Hal Hefner” played by Reece Thompson who is very believable and relatable because of Thompson’s performance. Everyone that went through adolescence can relate to “Hal Hefner” in some way.

Nonetheless, Rocket Science is such a unique movie that it is weird to describe. Despite its strange uniqueness, the film is entertaining and very funny for those with a specific type of humor.

All in all, a decent movie if you have 101 minutes to spare.