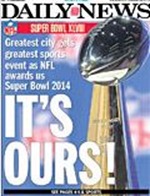 When it comes to some of the largest shows on earth, New York City has hosted, or has been home to many, if not, all of them. The Grammys, VMA’s, All-Star Games, Championship games, Broadway plays, you name it, it’s been here. Except for one. The Super Bowl.

In 2014, the NFL’s biggest event will come to the New York-New Jersey area for the first time. And unusually, the accepted bid by the NFL has caused a flurry of debate amongst fans, analysts, and league officials over the New Meadowlands Stadium (Which has yet to receive an official name) hosting Super Bowl XLIII.

What seems to be the biggest concern over the issue is not the city, area, or capacity in which New York and New Jersey can handle such an event. New York City can throw a party. And New York City goes big on everything. The reaction of fans and the mayor at a parade when the accepting bid was announced proves how serious this is to the area. The concerns are revolved around the weather and the precedent this will now set for the league moving forward.

Why is the Super Bowl in cold weather?

This argument I find very perplexing. Many feel that the Super Bowl should be a reward for the teams that make it there, and should be played in warm weather. However, this is probably the biggest fallacy created in the football world. I understand the Super Bowl is incredibly difficult to reach from an organization stand point, however, just getting there should never become a vacation. Does a prize fighter become number one contender and suddenly feel the need to relax a bit? Should World Series games in cold weather cities be moved out west or to the south to ensure a reward for winning their league’s pennant? Heck, cold weather cites are good enough to decided conference championship games, but not the Super Bowl?

Ridiculous, I know. Yet this is the opposition’s biggest worry.

In fact, a Super Bowl in New York City will ensure the best team will win. Championship teams in any sport win on their ability to adjust. Climates obviously affect football with warm climate teams having an advantage on cold weather teams in warmer climates and vice versa. The unknown in weather will force teams to adjust and initiate different ways to perform.

What if it snows?

The idea that if the game becomes a mess with snow and windstorms, that it may affect ratings, business, and the overall success that is Super Bowl week. This is understandable. In fact, let’s just admit it, Super Bowl weekend really isn't about the fans and their comfort, or the players and theirs. The biggest concern when it comes to a snow-filled Super Bowl is how it will affect the huge businessmen and head-honchos that loiter around Super Bowl week. It’s easy to please these types in 85 degree weather in South Beach. However, in East Rutherford, New Jersey in early February – yeah, not so much. 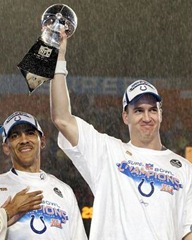 Bowl week activities and style the NFL intended to. However, despite most of the blame being directed at the cold weather, the city of Detroit was (and still is) in a perilous position, not offering much for such an event. That situation had more to do with location than weather.

Anyone else remembered Super Bowl XLI? In Miami. In a warm weather area. Yet, it rained throughout the entire game. Never has anyone complained about the outcome of that game.

Listen, the idea behind Super Bowls in warm-weather cities is to limit the amount of external elements on the NFL’s biggest game. That is understandable. However, the sole reason for the NFL being king in American sports is due to their ability to evolve. From Pete Rozell, revenue sharing, television programming that presents a personal experience, and even the enforcing of new rules (slowly becoming a higher scoring passing league), the NFL has evolved before other leagues, and knows what is best for their game. And one more time, they have made a decision in moving the Super Bowl to the New York-New Jersey area for a Super Bowl which will undoubtedly begin a movement of the league’s biggest game to many more regions, states, and cities.

Indianapolis has already gotten Super Bowl XLVI, with New York receiving Super Bowl XLVIII. Maybe Seattle is next? How about Foxboro? How great would a Super Bowl at Lambeau Field be? This may be the next evolution of the NFL.

Sounds good to me. More importantly, it sounds good for the overall health of the game.