If You Ain’t White, You Ain’t Right…No, Seriously. 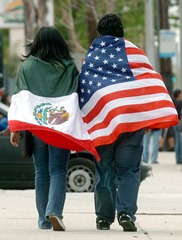 Arizona’s new immigration law SB170 is a very hot button issues in our current society. After several years of floundering around the issue of illegal immigration and not only finding, but drawing the line on when enough is enough, has led to one state in the union stepping up and declaring it’s version of the “the line”.

Because of that ice-breaker, now ten other states that includes Utah, Oklahoma, Colorado, Ohio, Missouri, Georgia, South Carolina, Mississippi, Texas, and Maryland have legislators clamoring for similar, or the same exact law as Arizona.

Whether states should have the ability to pass their own laws on immigration, a national and federal problem, is another issue, for another post, for another time.

However, as things become intensified, and very complex, one thing is for sure in all of this – there is no going back.

The issue of immigration whether some want to believe it or not, is one of the most important social-related issue facing our nation today.

While everyone has an opinion on this topic due to its controversy, I will take a stand and acknowledge that immigration is indeed a problem in the United States. Opposition to this belief will argue that the United States is indeed a melting pot. This is true. However, at what point do we stop throwing things into the melting pot before it boils over? Our government spending, taxes, and economy is indeed affected by immigrants who are here illegally, with some choosing to remain so, while Americans pay for their existence. At some point we need to take action. We do not have to shut the door on immigrants, but begin the process of legalizing them. At some point accountability needs to be in effect.

With that said, I understand Arizona Governor, Jan Brewer’s intent in her vision of this bill. Proper documentation should always be carried which is the basis of the law. The newest and most strict immigration law in our country requires anyone suspected of being in the country illegally to produce legal documentation (passport, green card, Arizona license).

While many find the bill to be aggressive, in all honesty, this practice is normal. We do it when we walk out the door with our license, and legal immigrants are indeed instructed upon receiving their green cards to do so as well. Governor Brewer furthers her point in stating that Americans that go overseas to another country must carry documentation on them to prove their visitation, which is indeed a valid point, and very correct.

And while you the reader may now believe I am in support of this bill from the previous agreements, you are somewhat right, but mostly very wrong. Very similar to this immigration bill. I find the bill to be reasonable in stature. Yet, it’s policy in enforcing it will create an open door for racial profiling.

While racism and immigration aren’t exactly partners in concept, such a bill will give way to a whole new wave of racism, stereotypes, and various social issues. Arizona, a border state, will have a very difficult time in proving racial profiling was not instrumental in the suspicion of an individual. There is no question of the large portion of who the “suspected” people will be.

Executive Director of the Arizona ACLU, Alexandra Soler Meetze, responded to the passing of the bill saying, "by signing this bill into law, Brewer has just authorized violating the rights of millions of people living and working here. She has just given every police agency in Arizona a mandate to harass anyone who looks or sounds foreign, while doing nothing to address the real problems we're facing."

The bill presents a serious tone to the joke, “if you ain’t white, you ain’t right”.

While it is an issue that has no easy solutions, we are headed toward a decision on where this nation will handle immigration moving forward. However, with this bill, we are clearly not there yet. The bill presents a double edge sword of presenting solutions and protecting the borders of Arizona while enhancing the use of racial profiling.

And while I understand that over 70 percent of Arizonians are in favor of the bill, something tells me that very little illegal immigrants from Canada and Western European countries currently in our nation will not be in high suspicion.