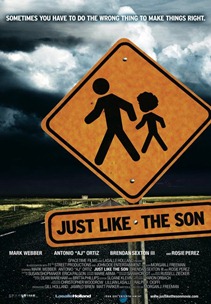 A petty thief that is one strike away from being placed in jail, begins a mentoring relationship and redemption with an orphan he takes a liking too. After becoming conflicted, the thief makes a personal choice to “do the right thing” for the first time in his life by kidnapping the young boy and driving him to his sister’s house in Florida.

While on their trip to Florida, Daniel and Boone stop at a local store to get some food and gas. After exiting the store, Daniel noticed Boone looking at a local little league game. They then both attend the game where Daniel teaches Boone the game of baseball.

Just Like The Son is an independent film that feels like a twist on The Pursuit of Happiness. Although the goal of the story’s plot is to get Boone to his sister, the story revolves around the developing relationship between a troubled delinquent and an unfortunate orphan. Just Like The Son is a great movie that depicts that relationship, and reveals the changes of Daniel as he sees someone just like him, heading in his same ways. As the relationship grows, its begins to emulate that of a father and a son. Despite the illegal ramifications, the situation creates a sense of underdog and compassion for both characters.

Mark Webber was terrific in his role, with Antonio Ortiz stealing several scenes as the young wide-eyed kid that believes in Daniel Carter. An argument could be made that Ortiz was much better in his role as Boone than Jaden Smith was as Christopher in the Pursuit of Happiness.

All in all, Just Like The Son is a recommended movie for independent film lovers. Although the plot did lack some depth which is representative in its running time of 84 minutes, it is still very enjoyable.