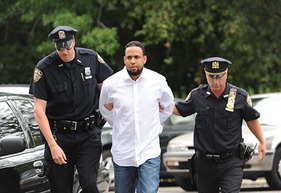 It is the kind of headline that makes you wonder if you read it correctly. Most importantly, it is another headline that makes you shake your head in amazement when in comes to the New York Mets. Francisco Rodriguez, one of the many players the New York Mets employ that weighs on the team like some sort of disappointing anchor, really threw the Mets a curveball when he decided to fight his girlfriend’s father inside Citi Field.

We’ve seen that fiery side of Rodriguez before. If it’s not closing out the ninth inning with his over-the-top antics, its his attempts to start a fight with Brian Bruney over mere words. Nonetheless, the mere fact that Rodriguez punched his girlfriend’s father in the face, regardless of what was said or preceded the scuffle, is a testament to the character of Rodriguez.

However, there is another headline that really fires up Mets fans, and causes baseball fans to shake their heads once again:

The mere fact that Rodriguez ended his season, and quite possible put the kibosh on his team’s season by such foolish behavior is unbelievable. The New York Mets have already placed Rodriguez on the “Disqualified List”, which can allow the team to withhold payment to Rodriguez because he suffered the injury away from the field.

In fact, there are reports that the Mets are attempting to void the deal due to his scuffle and pending legal troubles. And you know what? Good for the Mets.

Good for them for finally taking a stand. Yes, I know the Wilpons and the rest of the Mets organization would love to get out from under that insane contract, but most importantly, good for them for attempting to set a precedent.

Too many times we have allowed such a situation to go without action. Whenever the argument of “if you or I did that on the site of our job, we would immediately be terminated”, there is an immediate rebuttal of, “well, they are different, they are professional athletes. It’s just different.”

Well, why are they different?

Rodriguez is paid millions of dollars to perform a very high-demanding job. Yes, he has limited privacy and his job comes with many pressures, however, under no circumstances should he be fighting within the confines of his job. Most importantly, by no means should he receive any compensation for hurting himself in an illegal act. And quite possibly, I wouldn’t completely object to the Mets attempt of voiding his contract.

It will never happen, but imagine, a world in which athletes are not paid for acts that are not only illegal, but are grounds for termination in the workplace?